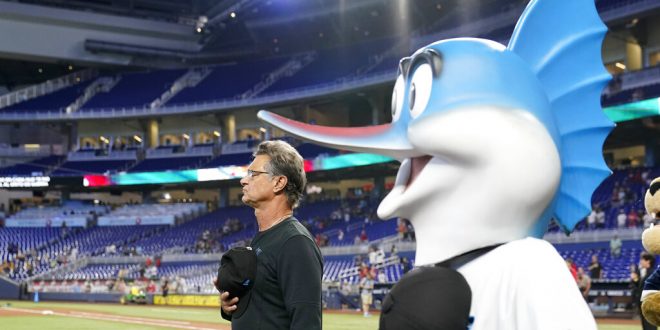 Miami Marlins manager Don Mattingly stands for the national anthem with Billy the Marlin before a baseball game against the Washington Nationals, Sunday, Sept. 25, 2022, in Miami. Mattingly will not be back as manager of the Miami Marlins next season.(AP Photo/Lynne Sladky)

Miami Marlins manager Don Mattingly announced he will no longer be working for the MLB team. Mattingly and the team decided Sunday his stepping down would be what was best for the team moving forward.

The former Yankees player has been managing for the Marlins since 2015, totaling seven seasons. Before working with the Marlins, Mattingly worked with the LA Dodgers from 2011-2015 .

Don Mattingly’s record with the Marlins was 437-584 with one round-one playoff appearance in 2020.

Don Mattingly will not manage the Miami Marlins in 2023. He spent seven seasons with the team and managed more games than anyone in club history. https://t.co/Xw2VIn70xq

Breaking: Don Mattingly is telling the Marlins today he will be leaving as manager at the end of the year

Don Mattingly and the Miami Marlins are parting ways after this season, via multiple reports. pic.twitter.com/KCOgq0diCp

The Marlins have been struggling to get back on their feet for the past few years.

Going 63-90 on the 2022 season, the Marlins did not make the cut for playoffs. They round of the season with three more series. First, they travel to New York for a two-game series against the Mets, starting Tuesday. First pitch is slated for 7:10 p.m.

Thursday begins a three-game series with the Milwaukee Brewers, then they end the season in a home series against the Atlanta Braves.

Since Mattingly has been managing the Marlins, the team has not been doing well. As Mattingly and the team mutually decided on him not continuing as the manager, other teams have announced that they will be looking for someone new before the 2023 season starts.

Some teams looking for a new manager include the Toronto Blue Jays, Los Angeles Angles and Texas Rangers. After playoffs concludes, more teams may announce openings.

Upon the agreement of Mattingly stepping down, the Marlins are hoping that hiring a fresh face for the 2023 season will be a key factor in the team getting back on their feet.