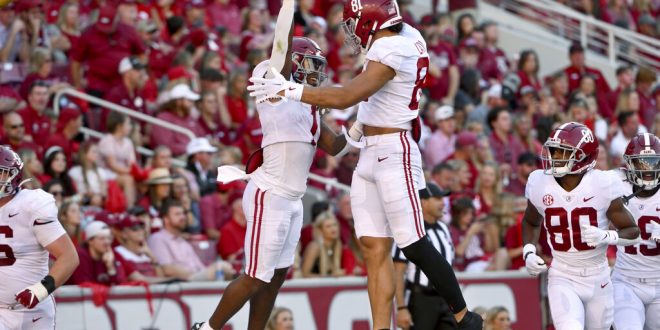 Alabama running back Jahmyr Gibbs (1) celebrates with tight end Cameron Latu (81) after scoring a touchdown against Arkansas during the second half of an NCAA college football game Saturday, Oct. 1, 2022, in Fayetteville, Ark. (AP Photo/Michael Woods)

The Alabama Crimson Tide (5-0) are set to take on the Texas A&M Aggies (3-2) in an SEC showdown. The anticipated matchup is looking lopsided so far based on how both teams have performed this season. Alabama has taken the prime position of first place in the AP Top 25 rankings after last week taking it from Georgia. Last week the Crimson Tide defeated Arkansas 49-26. The Razorbacks looked outmatched most of the game. On the other hand, the Aggies have not looked good as of late. They lost their last game against Mississippi State after starting the season 3-1 and will come into this game unranked. Although the odds are not in favor of the Aggies, you might not want to count them out just yet.

On paper, this matchup does not look good for Texas A&M. That was also a narrative last year when these two teams faced off at the beginning of October. Spoiler alert, the Aggies upset Nick Saban and the Crimson Tide 41-38. It was an October thriller that made a highlight of their season after the Aggies kicked the game winning field goal as the clock hit zero. Texas A&M will be looking to slay the giant once again this season. The high-octane offense of Alabama will need to be subdued if Texas A&M wants to have the best chance at winning on Saturday. One of the many challenges that teams face when playing against Alabama is their ability to break tackles. That might not be a problem for defensive back Antonio Johnson who leads the team in tackles with 46. Texas A&M head coach Jimbo Fisher spoke on how important tackling will be for them during the weekend.

While there is always room for an upset, there is a reason why Alabama is number one right now. You could point to the explosiveness of the entire running back core or strength up front on the offensive line, you could easily find a star at almost every position. Especially at the quarterback position. The reigning Heisman Trophy winner Quarterback Bryce young has been stellar this season. Hey has thrown for 1200 yards and 14 touchdowns with only three interceptions.

Unfortunately, Young aggravated a past shoulder injury in their last game against Arkansas and was taken out in the second quarter. Some might assume that if Young doesn’t play that it would give Texas A&M a big opportunity to steal a game, which might be true. On the other hand, it did not seem to slow down Alabama in their last game as they had explosive running back Jahmyr Gibbs break away for two 70+ yard rushing touchdowns in the fourth quarter. Nick Saban has shown the ability to adjust to almost any situation in his career and will do the same if Young is unavailable on this weekend. Saban talks about the status of Bryce Young and his injury.