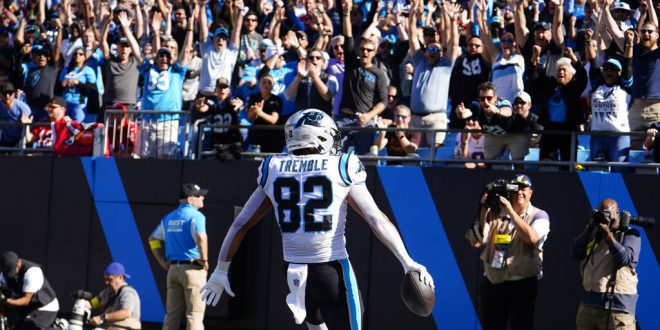 The Carolina Panthers entered Sunday’s matchup against division rival Tampa Bay as the clear underdog but left the game with a 21-3 victory over the Buccaneers.

A New Look for the Carolina Panthers

Despite sending franchise favorite Christian McCaffrey to the 49ers, ejecting and trading wide receiver Robbie Anderson and firing head coach Matt Rhule, the Panthers managed to come out on top in week seven. Carolina produced an impressive performance in their first game post-McCaffrey as Panthers running backs Chuba Hubbard and D’Onta Foreman recorded 181 rushing yards combined. Despite the outrage of fans over McCaffrey’s exit, the Panthers performed just fine without him.

The Panthers offense showcased a new look on Sunday as the Panthers earned a season-high 343 yards of offense against the Buccaneers. Carolina’s third-string quarterback P.J. Walker stepped in for an injured Baker Mayfield and proved himself capable of the role. Walker completed 16 of 22 passes for 177 yards and two touchdowns against the Bucs.

Walker’s control of the ball alongside his ability to connect with Carolina wide receiver D.J. Moore led the Panthers to victory.

Carolina rallied behind interim coach Steve Wilks who recorded his first win since taking over for Rhule. Rhule was fired on October 10, just five games into his third losing season at Carolina. He amassed an 11-27 record with the Panthers.

While Sunday’s contest says a lot about the Panthers, it says more about the Buccaneers. Just one week after falling 20-18 to the Steelers, Tampa Bay continued their 2022 slump against a then 1-5 Carolina team.

Video: Mike Evans says no one play is responsible for a loss, but he knows how big his drop was on the opening drive. “I saw the life go out of us.” pic.twitter.com/RvprGnGqFo

The play set the tone for a game where the execution did not get any better for Tampa Bay. Evans led the Bucs with nine catches for 96 yards, but the offense failed to fall in line. The Bucs did not score until a fourth quarter field goal that brought the score to 14-3, Carolina.

The leadership of head coach Todd Bowles and offensive coordinator Byron Leftwich is being questioned among fans as failed coaching efforts have become increasingly problematic. Apart from the pressure on Bruce Arians’ successors, all eyes are on quarterback Tom Brady, who had 32-of-49 passing for 290 yards against the Panthers. Brady has not recorded this many losses this far into a season since the New England Patriots dropped four straight games to reach 3-4 in 2002.

Tom Brady has not been below .500 this far into the season since 2002. pic.twitter.com/EkrhR9UlbD

With Brady leading the Bucs, fans are not ready to count the team out just yet. However, the trouble in Tampa Bay needs to be addressed. The Buccaneers will not have much time to clean up their mistakes as they return to action for Thursday night football as they play host to the Baltimore Ravens.

Ravens head coach John Harbaugh has never lost to Tampa Bay, posting a 3-0 record, since taking the role at Baltimore in 2008. Under Harbaugh, Baltimore is 8-4 in Thursday night matchups.

Currently, the Ravens are 4-3 on the season as they hold the No. 1 seed in the AFC North. The Buccaneers remain No. 1 in the NFC South, posting a 3-4 record. The last time these two teams met in Tampa was back in 2014, when Baltimore took a 38-0 second-quarter lead. The Ravens scored on their first six possessions and rallied to a 48-17 victory over the Bucs.

Meanwhile, the Panthers will next face the Falcons on the road. While Atlanta is favored to win, Carolina will look to continue to shock the league.

Ellie is a third-year sports and media journalism major at the University of Florida.
@ellie_shreve
Previous Jaguars Fall to Giants 23-17
Next Judge Coy On Yankees Future