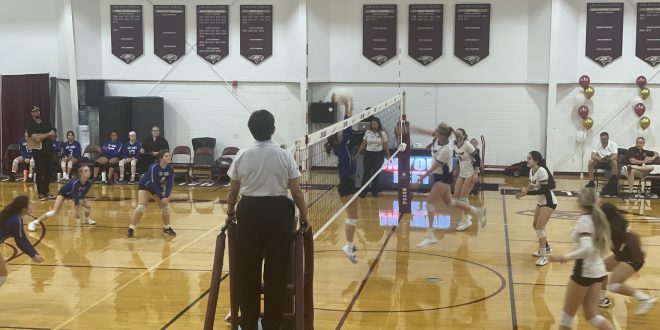 High school volleyball regional playoffs is underway in Gainesville with three teams already moving on to the semi-finals.

The first game on the slate was the Oak Hall Eagles v. the St. John Paul II Panthers in the 2A regional quarterfinals. Oak Hall hosted the matchup, as it was the higher seed. It went 23-4 on the season, which lead it being a one-seed in the regional tournament. St John Paul II went 12-15 on the year, good enough to win its district and punch its ticket to tournament play.

The Eagles were able to carry the momentum of their strong season into this matchup. Winning three straight games to sweep the match and take them one step closer to a state title. Their next match is against the 13-9 Harvest Community Warriors in the regional semifinals Friday at 7 p.m.

The Santa Fe Raiders took down the Space Coast Vipers in the first round of the 4A regional playoffs. The Raiders went 26-2 this year and earned a one-seed and home court advantage through their side of the regional bracket. The Vipers went 13-6 this year and reached the tournament after finishing second in their division.

Santa Fe continued its dominance and won the match in straight sets. Senior Jalyn Stout led the team with 12 kills on the way to victory.

It will play the 18-5 Titusville Astronaut War Eagles at home on Friday at 7 p.m. in the next round of the playoffs.

The last matchup of the day was the PK Yonge Blue Waves v. the Trinity Catholic Celtics in the 3A regional quarterfinals. PK Yonge was 14-11 on the season and traveled on the road to face the 18-3 Celtics. Trinity Catholic took care of business and swept the Blue Waves. Senior Kiana LaBorde had nine kills in the match.

The Celtics have not lost a match since Sept. 3. They will take on Florida State High School in the next round Friday at 7 p.m.

The 20-7 Gainesville Hurricanes take on the 20-5 Mosley Dolphins Wednesday in the 6A regional. Mosley is the higher seeded team and will host the match at 6 p.m. The winner will play this Saturday against the winner of Gulf Breeze v. Navarre.