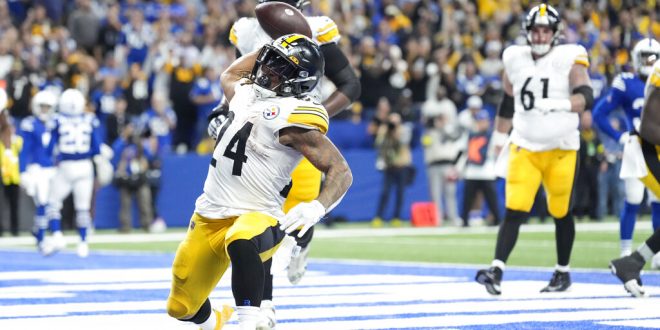 Pittsburgh Steelers running back Benny Snell Jr. (24) celebrates a touchdown run during the second half of an NFL football game against the Indianapolis Colts, Monday, Nov. 28, 2022, in Indianapolis. (AP Photo/AJ Mast)

In this week’s Monday Night Football matchup, the Pittsburgh Steelers traveled to Lucas Oil Stadium to face off against the Indianapolis Colts. The first half of the game was a slow start, but the Steelers eventually pulled ahead, ending the game 24-17.

Both teams had a slow first quarter on Monday night. The only points scored were from a single field goal delivered by Steelers Matthew Wright. In the second quarter, things turned around for the Steelers. Quarterback Kenny Pickett’s 35-yard pass to George Pickens did not get them in the end zone, but it set them up for their first touchdown of the night.

Six minutes later, running back Najee Harris stretched the ball over the goal line for six. The extra point was good, extending Pittsburgh’s lead to 13. That would be the last of the ball Harris would see for the night, as he exited the first half early with an abdominal injury. Before his early exit, Harris had 10 carries for 35 yards and a touchdown on the night.

The Colts Come Back

Indianapolis struggled in the first half, only managing to put up three points before halftime. Returning from the half, rookie Dallis Flowers returned the opening kickoff of the second half for 90 yards, changing the pace of the game.

Two minutes later, quarterback Matt Ryan handed the ball to running back Jonathan Taylor to score on a two-yard run to cut the deficit to 16-10. At the end of the third quarter, Ryan threw a six-yard TD pass to Michael Pittman Jr. to give the Colts a 17-16 lead late in the third quarter.

The Colts managed to take a slim lead in the third quarter, but that did not last all night. Halfway through the fourth quarter, running back Benny Snell Jr. delivered a two-yard touchdown run to put the Steelers up by five. They attempted and succeeded the two-point conversion, caught by Pickens in the back right corner of the endzone.

Snell Jr. completed 12 carries for 62 yards in addition to his touchdown, while Pickett completed 20 of his 28 attempted passes for 174 yards.

The Pittsburgh Steelers will travel to Atlanta to take on the Falcons on Dec. 4, while the Indianapolis Colts will travel to Dallas to play the Cowboys in primetime on Sunday night.