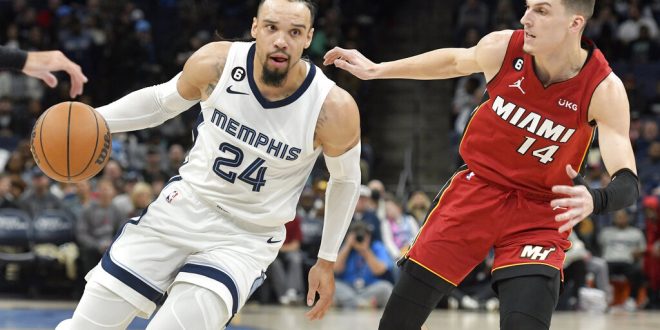 The ninth place Miami Heat fell to the Memphis Grizzlies Monday, dropping their record to 11-13.

The Grizzlies moved to 15-9 in the second game of a back-to-back. The team defeated the Pistons Sunday.

Grizzlies: No Ja? No Problem

Tyus Jones had a career night, leading the team in scoring and assists and shooting from the field at an excellent clip. The former Duke Blue Devils star finished 10-16 including three-for-six from deep, which was good enough for a career high 28 points. He added 10 assists and five rebounds, pushing the Grizzlies to a win without star point guard Ja Morant.

Memphis had three more double digit scorers. Santi Aldama finished with 18 points and 10 rebounds, while Dillon Brooks added 17 and Brandon Clarke contributed 11 points off the bench. The team dominated the battle in the paint, scoring 64 points there to Miami’s 24.

Miami’s largest lead of the night was 11, and the team knocked down 14 three pointers compared to Memphis’ eight. Despite going 4-2 in its last six games, Miami still sits under .500. Outside of the top three teams, the east is a dog fight.

The Heat, Knicks and Wizards are tied at 11-13 for ninth, tenth and eleventh place. Those teams sit one game behind the Sixers and Raptors and a game-and-a-half behind the sixth place Nets.