The NFL still has one more game on tap for this week when the San Francisco 49ers (5-2) collide with the Arizona Cardinals (4-3) in an NFC West showdown on Monday Night Football.

In other Week 8 action, the Jacksonville Jaguars (1-6) fell to the Green Bay Packers (5-3) 24-15 in Lambeau Field. Green Bay quarterback Aaron Rodgers led the Packers with 186 passing yards and two touchdowns for their third straight win.  Jacksonville quarterback Blaine Gabbert finished the day 27-for-49 with 303 passing yards and a touchdown pass. Gabbert says the Jags have to get better capitalizing on their opportunities in the red zone.

The Miami Dolphins (4-3) grounded the New York Jets (3-5) 30-9 in MetLife Stadium. Miami backup quarterback Matt Moore was 11-for-19 with 131 passing yards and a touchdown pass after coming in for the injured Ryan Tannehill.  Miami coach Joe Philbin says the Dolphins will re-evaluate the injury once the team returns home.  Dolphin running backs Reggie Bush and Daniel Thomas combined for 101 yards on 29 carries and a rushing touchdown.  Philbin says the Fins have to focus on their upcoming game against the Indianapolis Colts rather than their now three game win streak.

The Tampa Bay Buccaneers (3-4) enjoyed a 36-17 win over the Minnesota Vikings (5-3) on Thursday in Minneapolis.

Other highlights from around the league…

The Detroit Lions (3-4) knocked off the Seattle Seahawks (4-4) 28-24 in Ford Field.  The Lions enjoyed a big game out of quarterback Matthew Stafford who threw for 352 yards and three touchdowns while adding a rushing score.

The Atlanta Falcons (7-0) still have an unblemished record after soaring over the Philadelphia Eagles (3-4) 30-17. Atlanta quarterback Matt Ryan threw for 262 yards and three touchdowns. The Falcons are now 15-0 when Ryan throws for at least three touchdowns.

The New England Patriots (5-3) blew out the St. Louis Rams (3-5) 45-7 across the pond in Wembley Stadium in London.  Patriots quarterback Tom Brady threw for 304 yards and four touchdowns; it was Brady’s 50th game with three or more touchdown passes.  Only Brett Favre, Peyton Manning, and Dan Marino have as many three touchdown games.

Buffalo, Cincinnati, Baltimore, and Houston were all on BYE. 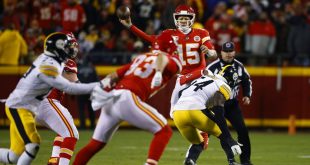