Home / NHL / Do the Sharks Still Have Some Bite with the Series Moving to San Jose? 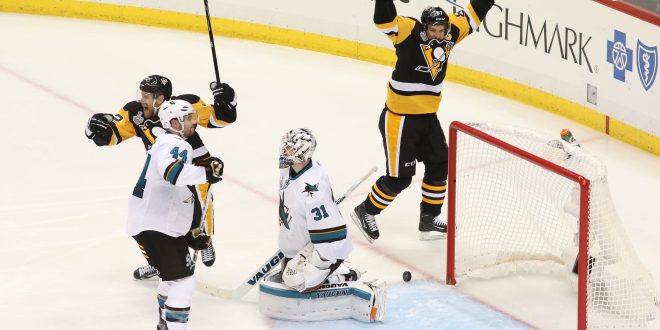 Do the Sharks Still Have Some Bite with the Series Moving to San Jose?

So far, the story for this San Jose-Pittsburgh NHL Stanley Cup Finals series has been San Jose rebounding from Pittsburgh’s early punches. However, the Penguins have finished each game with the final blow. Pittsburgh did its job defending their home ice, and now San Jose is on the ropes. This is the first time that the Sharks have been down by two games throughout the playoffs. With this being the Stanley Cup Finals, the pressure is turned up to 11 and San Jose is ready for the challenge. They are out for blood and are ready for a Rocky Balboa-style comeback.

The Penguins are prepared for anything San Jose is going to throw at them. After all, Pittsburgh has still ended on top after San Jose forced a tie in each game. According to Penguins coach Mike Sullivan, the team has responded well to the Sharks’ rallies by keeping their composure late in games.

The opposite can be said about the Sharks.

San Jose’s center Joe Pavelski emphasizes that the team is turning the puck over trying to be too fine with Pittsburgh’s defense. Even after the tough losses, the team hasn’t been too down on themselves. Sharks coach Joe DeBour echoes the old cliché that there is plenty of hockey to be played. To DeBour’s credit, it’s true. There are potentially five games still left in the series and three of them are in San Jose. The question is whether the Sharks can get on the attack early against the Penguins now that they’re home.

These next two games will show us two things; either we will have a down-to-the-wire series or the Sharks have lost their bite.

The next bout in the series is slated for Saturday night at 8 p.m.