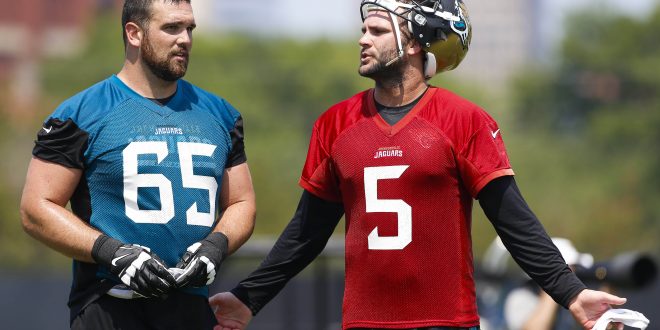 Jags QB Blake Bortles Ready For The Start Of Camp

The Jacksonville Jaguars will have their first training camp session this Friday as they prepare for the start of the upcoming NFL season. The Jags will be looking to improve upon the 5-11 record they earned last year in quarterback Blake Bortles’ sophomore season at the helm of their offense. Jacksonville hopes to see Bortles take another step forward this year just as he did last season when his numbers jumped up dramatically.

After throwing just 11 touchdown passes in his rookie season, Bortles threw 24 more touchdowns in his sophomore campaign en route to gaining just over 4,400 passing yards. On the flip side, in addition to throwing more touchdowns, Bortles had seven more interceptions last year than he did in his rookie season. The improved stats are partially attributed to his increased pass attempts overall and in the red zone.

Before loading up on defensive players in the draft, the Jags added veteran tailback Chris Ivory to their offensive attack as they look to take the pressure off of their developing quarterback with a potent running game. Ivory is expected to share carries with T.J. Yeldon, who was drafted by Jacksonville in the second round just last year. Despite the addition, Bortles says he’s glad to have most of the offensive roster intact for this season.

The Jags will get a chance to see if their continuity on offense will result in more on-field production when they face the Green Bay Packers at home in Week One of the regular season.

Sound From Florida News Network used in this story.