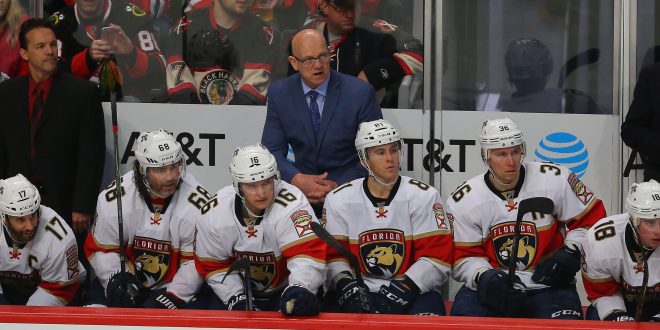 The Florida Panthers(11-10-2) suffered a 2-1 shootout loss against the Chicago Blackhawks(15-6-3) on Tuesday night. The result comes in the Panthers first game since the firing of former head coach Gerard Gallant. They’re now tied for fifth place in the Atlantic Division.

Florida gave a valiant effort despite the circumstances. Veteran Jaromir Jagr scored his fourth goal of the season 35 seconds into the third period. The goal tied the game at 1-1 after Chicago winger Richard Panik had put the Blackhawks ahead 1-0 with a late first period goal. Artemi Panarin scored the first of two goals in a quick shootout and Panik scored the game-winner on Chicago’s next attempt.

The goalies for both teams were brilliant all night long. Blackhawks goalie Corey Crawford recorded 38 saves on 39 shots in Chicago’s first game at the United Center after playing seven in a row away from home. Roberto Luongo had 32 saves on 33 shots in a losing effort, his first overtime loss of the season.

The Blackhawks won without the efforts of captain Jonathan Toews. He missed his third consecutive game with an upper-body injury.

General manger Tom Rowe has taken over the Florida head coaching duties for now. Rowe does have some coaching experience within the Panthers organization. He started the 2015-16 season as coach of their AHL affiliate. After the game, Rowe said the result was awesome given the circumstances. Aaron Ekblad thinks the firing was unfortunate but says the team needs to move forward.

Gallant was 96-65-25 during his time as Florida’s head coach and was given a two-year extension in January. The firing comes off the heels of last season when the Panthers won the Atlantic division and advanced to the playoffs for the first time since 2011-12.

Both teams will be back in action on Thursday night. The Blackhawks will host the New Jersey Devils(10-7-5) and the Panthers will hit the road to take on the Detroit Red Wings(11-10-2).

Picked up a point.