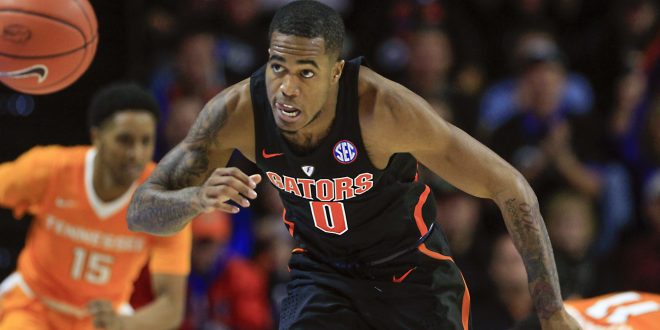 The Florida Gators dropped a very important SEC game on Wednesday night, losing by a final score of 57-53 to the South Carolina Gamecocks. The Gator offense stalled for most of the contest before coming to life at the end of the game, scoring 11 points in the final four minutes of action. Strong performances by Kasey Hill and Canyon Barry kept the Gators afloat, but Sindarius Thornwell’s 15 second half points (20 overall) proved to be too much for the visitors to hold off.

Even though the Gators missed 13 foul shots and went 0-17 from beyond the arc, the physicality and defensive focus from both sides played a huge factor in the outcome of the game. Kasey Hill fouled out and three other Gators ended with four fouls, ultimately sending South Carolina to the line 34 times. Playing without Hill for much of the second half seemed to be the downfall of Florida’s offense.

Hill’s Impact Against the Gamecocks

Hill looked rattled by South Carolina’s defensive pressure with two turnovers in the first four minutes of action. The speedy court general got the Gator offense going after a rough start that saw both teams stay scoreless through the first five minutes and 46 seconds of play. Hill broke the tie with a steal and easy finish on two consecutive possessions, putting the Gators up 4-0 and providing much-needed momentum.

Hill completely controlled every aspect of the game during the first half. In 16 first half minutes, the Central Florida native scored 11 points on 5-of-8 shooting to go along with four steals, two assists, one rebound, and a team-leading +12. His stat line to conclude the game was identical, except for the +12 ending in a disappointing +3. His do-it-all mentality on both ends of the court has sparked this Gator squad, but his play has been laced with inconsistency.

With Hill confidently controlling the offense by getting into the interior of the defense and finding the open man, the Gators can sometimes seem unstoppable. Nonetheless, when Hill plays off the ball or lacks the confidence to attack the rim with authority, the offense stalls, leading to some major scoring droughts that were on full display against the Gamecocks.

In the 18 games that the Gators have played this season, Hill has had less than 10 points and five assists in half of them. The pass-first point guard has also had major trouble holding onto the ball, averaging a career-high 2.9 turnovers per game.

Defensively, Hill is an absolute pest. His quick hands make it easy to pick his man’s pocket, and his high basketball IQ provides the ability to get into the passing lanes. Hill’s 2.0 steals per game leads the Gators and ranks fourth overall in the SEC. His three-point shooting (19%) and his free throw shooting (65%) this season is a liability—and has been during his entire tenure at Florida—but he’s proved time and time again that he can make up for it in almost every other way.

The Gators competitive play against top notch competition has proved they can stay on the court with just about any team in the country. However, Hill’s somewhat inconsistent play has hampered Florida’s ability to pull out top notch wins, which could haunt them come March. We’ll look to see if Hill and the Gators can get back on track as they host the Vanderbilt Commodores Saturday afternoon.