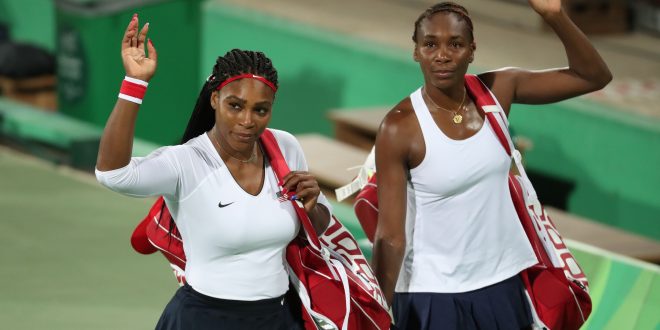 The Williams sibling rivalry started at the Australian Open in 1998 when older sister Venus beat younger sister Serena, 7-6, 6-1, in a second-round match. Nearly two decades later, the sisters are still battling it out again.

As you can see its not just an Australian Open title, its a family competition of who is the better Williams sister. Both sisters are competitive but the Williams sisters take that meaning to a whole new level. This is the eighth major final the sisters have played against each other. Serena leads Venus 6-2.

Venus Ebony Starr and Serena Jameka Williams, whose tennis journey began on the public courts of Compton, California, will now battle it out again in Melbourne, Australia in the Australian Open final on Saturday night.

.@serenawilliams & @Venuseswilliams are no strangers to GS finals battles. Here are their 2 moments at ours. https://t.co/jav2JXnv34 #USOpen pic.twitter.com/paflRKZyTg

Little sister Serena is so proud of her big sister saying she is a total inspiration and playing in the final together is a dream for them. Venus is her toughest opponent. No one has ever beaten her as much as Venus.

In the first meeting, this was probably very difficult to compete against your sister but with this eighth time Williams matchup, these sisters are used to competing head-to-head.

.@SerenaWilliams will meet her big sister in her 8th AO final after closing in on Lucic-Baroni with a 6-2 6-1 win. #TrueAchievement #USOpen pic.twitter.com/n2E5zxlJ0V

For Venus, this is her first major final in seven-and-a-half years. The competition is set high due to her last major final she won was in 2008 in Wimbledon. Venus’s inspirational battle with Sjogren’s syndrome has dramatically changed her career but as a result she has come back stronger than ever.

When Venus won the semifinal, she rejoiced like a little girl as she was so excited to advance and play her sister.

Either way, a Williams will win whether it is Serena or Venus. Both have fought and overcome many obstacles to arrive at this point, so either way the family should be proud despite the match’s outcome. Venus brings her killer instinct to each match while Serena puts her killer face on display. This matchup won’t be any different. Serena admitted that playing her sister is definitely uncomfortable.

Serena also said, “I feel no matter what, that we have both won, after all we have been through. I know a Williams is going to win this tournament.”

These sisters will still battle it out until the end but the odds favor the little sister,  again overshadowing her older sister giving her 23 Grand Slam single titles and pushing herself one title ahead of Steffi Graf for the Open Era record.

Hello my name is Kaitlin Alexander, a passionate story teller and lover of sports. Fun facts about me: I am a world traveler, interviewed all three UF Heisman Trophy winners, and a former intern of Bleacher Report. Follow me on Twitter: KalexanderUF
@KalexanderUF
Previous Magic Face The Celtics at The Garden
Next Jeff Gordon Retired… Or Is He?