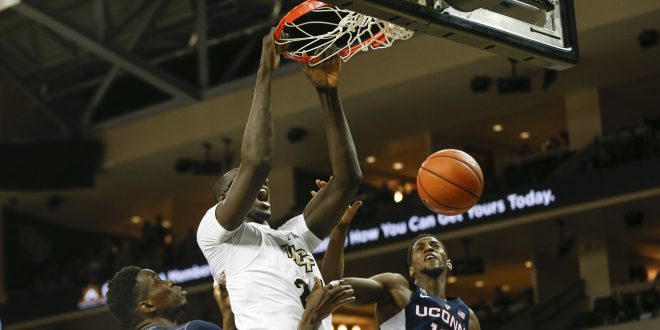 The Knights basketball team defeated the Cincinnati Bearcats with a 53-49 upset victory Sunday afternoon on their home court. Cincinnati is ranked number 15 in the AP Poll and the UCF students stormed the court to celebrate when the buzzer sounded to end the game. This marked the Knights fourth ever victory over a ranked opponent and their first since 2011 when they beat the No. 4 UConn.

Highlights for the Knights

B.J. Taylor had a huge season high of 27 points, 17 of those points being in the first half. He also made one of the biggest shots of the game when he sunk a three pointer as the shot clock was expiring with 33 seconds left in the game. UCF’s defense was on fire with 7-foot-6 center Tacko Fall. Fall had four blocks, eight rebounds, and seven points; he troubled Cincinnati all game. At the end of the game, when Cincinnati brought the gap to only two points, Fall rebounded Cincinnati’s Tre Scott’s attempted dunk and got fouled in the process. Fall made both free-throw attempts and put the game out of reach for Cincinnati.

This loss was definitely one that Cincinnati did not need. UCF has a No. 6 nationally ranked defense, and the Bearcats struggled shooting the ball. They dropped to second in the AAC standings and are now sitting behind SMU, a team they were trying to stay in step with. If they want to gain a share of the AAC regular-season title, they’ll need to hope that SMU  loses one of their remaining games and they will have to win out the remainder of their games. They’re going to have to fight hard in their game on Thursday against Houston.

Looking Ahead at UCF

The Knights have suffered a tough season on the road, however they have only lost two games at home during the 2016-17 season. Their big win against the Bearcats won’t get them into the NCAA tournament; they would still likely need to win the AAC Tournament. But nonetheless, a victory like this one will be a great momentum builder for the postseason tournament.

UCF travels to Tampa to take on USF on Thursday to close out their regular season.