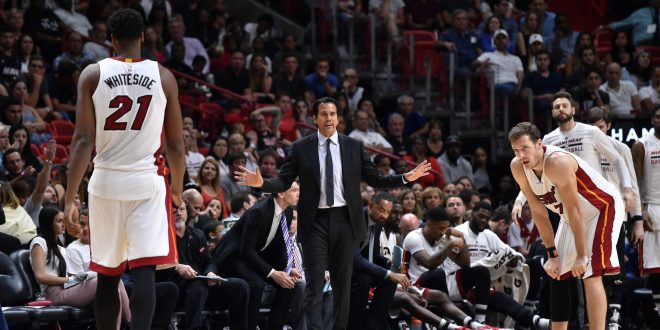 The Miami Heat needed a two-part miracle last night to enter the NBA Playoffs. Miami defeated the Washington Wizards 110-102 at home to accomplish their side of the story. However, neither the Atlanta Hawks nor Brooklyn Nets were able to win against the Indiana Pacers and Chicago Bulls to help the Heat make the postseason. The Hawks, the No. 5 seed in the Eastern Conference, rested their starters against the Pacers. The Nets, the worst team in the league, rested their starters against the Bulls despite the Boston Celtics likely taking their first round pick because of the Paul Pierce and Kevin Garnett trade years back. Miami urged their fans that the Heat culture is the definition behind the success and chemistry of this team. Nonetheless, the Heat going 30-11 since January 15th still has them going on vacation at the same time as Brooklyn this year.

The previous offseason was defined by the news of franchise player Dwyane Wade departing to the Chicago Bulls. The identity quickly began shifting to Hassan Whiteside and company for the future of the Miami Heat. However, ‘Wade County’ was now gone just as ‘The Heatles’ disappeared following the separation of the big three. The common use of ‘Heat Nation’ became the unifying saying for fans of the team that recently made the NBA Finals four years in a row. Miami used their cap space to replace their former superstar with a mixture of veterans and young players to emphasize team depth.

Miami began the season 11-30 and were at one point the second-worst team in the NBA. Yet, a 13-game winning streak including wins against the Golden State Warriors, Cleveland Cavaliers, and Houston Rockets all of a sudden made the team the focus of NBA headlines. Great bench support, three-point shooting, and clutch performances by Dion Waiters provided hope that they could continue dominating the opposition. Okaro White became the team’s trend by using the winning streak number and his name (12-0karo,13-0karo, etc.,).

Unfortunately, the Bulls owned the tiebreaker over the Miami Heat after beating the Heat twice in the beginning of the season. On the other hand, the Heat went 2-1 versus Indiana with both wins in the second half of the season. Many NBA fans shared the belief that the Heat should have made the playoffs, but all 82 games matter.

Head coach Erik Spoelstra, a likely candidate for NBA Coach of the Year, gave an emotional response to the media in the press conference following the game against the Wizards.

Ironically, the Heat finished 41-41 in the regular season by going 30-11 after the all-star break. Heat captain Udonis Haslem rarely played and made an appearance at the end of the Wizards game to a standing ovation. Haslem and the front office earn respect through success and the players’ inclusion of both work ethic and chemistry. The win last night against the Wizards was essentially “fan appreciation night”, to demonstrate how Heat culture includes every fan who supports the team. In fact, a ‘Heat Culture’ banner now hangs at the American Airlines Arena instead of the ‘Heat Nation’ one that was there prior.

"I don't know if I've ever wanted something more for a team."@MiamiHEAT head coach Erik Spoelstra on not making the playoffs. #GameTime pic.twitter.com/fbZSoGxvBp

The primary focus of the Miami Heat before the 2017-18 regular season is probably to finalize the situation revolving around Chris Bosh. Bosh’s contract equates to over $25 million in each of the next two seasons. Luckily, insurance will pay for $40.95 million and the Heat or a team who trades for Bosh would pay $34.9 million. The possibility of a trade and not needing a roster spot resulted in Bosh not being released this season. Miami will try to retain James Johnson and want Dion Waiters and Willie Reed to exercise their player options. The front office will likely go ahead with Josh Richardson’s team option to also keep him another season. Offloading Josh McRoberts because of his six million dollar contract and injury prone seasons can also open up cap space.

The Miami Heat are 14th in the NBA Draft Lottery standings with a 0.5 chance of securing the first pick in the NBA Draft. Pat Riley and other front office officials are projected to draft a forward or possibly a center. Miami already has depth at guard with Goran Dragic, Tyler Johnson, and more. However, free agency and trades can shape up next year’s roster entirely.