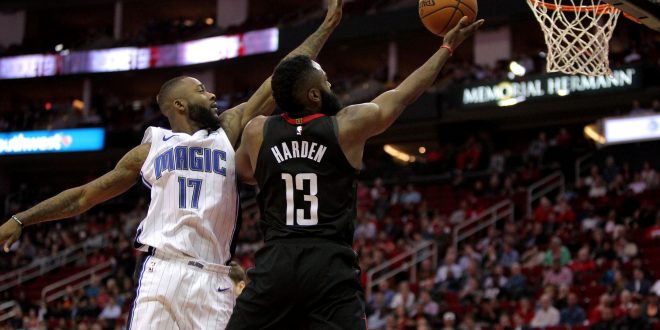 James Harden continued his MVP campaign with a career-high 60-point, 11-assist and 10-rebound performance as the Houston Rockets defeated the Orlando Magic 114-107.

Harden shattered numerous records on this memorable night. The former Arizona State product became the first player in NBA history to record a 60-point triple-double. The previous scoring high for a triple-double was held by his former teammate Russell Westbrook, who recorded 57 points in a game last March. He also set the Rockets franchise record for points in a game, defeating Calvin Murphy’s record of 57.

Harden talked about what it meant to him to take down Calvin Murphy’s (almost) 40-year record.

The Magic kept the contest surprisingly close against the second best team in the league. Star forward Aaron Gordon missed the game with a hip flexor injury. The Magic offense thrived without their leading scorer. Mario Hezonja and Marreese Speights led the way with 17 points apiece. Four other Magic players, Jonathon Simmons, Evan Fournier, Shelvin Mack and D.J Augustin also chipped in with double-digit scoring. Orlando shot 15-31 (48.4%) from beyond the arc and 50.6% from the field. The Magic did most of their damage in the paint and beyond the three-point line, scoring 91 of their 107 points in these two areas. The game was tied at 107 a piece with 3:36 to go, but the Rockets closed out on a 7-0 run to secure the victory.

The Rockets were without three key players on Tuesday night. Chris Paul was sidelined with a groin injury and Trevor Ariza was out with a hamstring injury. Eric Gordon left the game early in the second quarter with lower back stiffness. Harden didn’t let this affect him, ultimately scoring 18 of Houston’s 24 points in the fourth quarter to secure the advantage. The Rockets out-rebounded the Magic 40-33. Houston shot 37.1% from beyond the arc and scored 48 points in the paint. Even without three of their four top scoring options, the Rockets continued to roll offensively.

After the contest, James Harden stayed humble about his performance and talked about how important this victory was for his team.

Here are the highlights from Harden’s extraordinary performance on Tuesday night.

#JamesHarden becomes the first player EVER with a 60 point triple-double in @HoustonRockets home win! pic.twitter.com/dLzMU2cRNh

The Magic head back to Orlando to host the Los Angeles Lakers on Wednesday night. The Rockets look to extend their winning streak to three as they take on in-state rival San Antonio on Thursday night.

Previous No. 23 Florida Goes Stagnant On Offense in Loss to Georgia
Next Indians to Ditch Longtime Logo