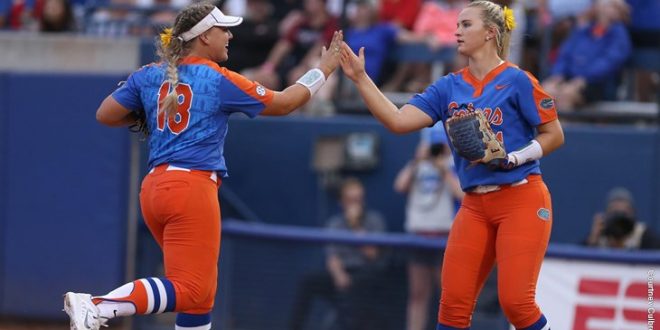 The Florida Gator softball team opened the Judi Garman Classic in Fullerton, California with two convincing wins. This extends their winning streak to ten and improves their overall record to 18-1.

It was all Gators from first pitch to last as Florida took down the Lions 13-0 in five innings.

Aleshia Ocasio got the start in the circle for the Gators. She threw four lights out innings, only allowing one hit and one walk while striking out seven.

Freshman Natalie Lugo came in for relief and, after giving up a lead-off single, retired the next three Lions batters in order.

The Gators’ bats showed up early and stayed hot throughout the entire game, scoring at least once in every inning.

The top of the first featured back-to-back home runs by Nicole DeWitt and Amanda Lorenz.

T1 | Back-To-Back‼️ @AmandaLorenz18 with a solo home run and it's now 2-0 Florida over Loyola Marymount pic.twitter.com/ToJA4Qv6hE

The Gators really took command of the game when they scored five runs in the fourth inning with the help of a three-run home run from Jordan Matthews.

Florida tacked on four more runs in the fifth inning thanks to a grand slam by Lorenz. At the plate, Lorenz went 4-4 with 2 HR and 6 RBI.

All but one Gator starter reached base at least once throughout the game.

The Gators blanked Cal State Fullerton 10-0 for their second run-rule victory of the day.

Florida got the scoring started early after Kayli Kvistad hit an RBI single through the right side to bring home Hannah Adams.

The Titans threatened in the bottom of the third, but the Gators were able to escape a bases-loaded jam.

The Gators responded with an explosive nine-run top of the fourth. After Sophia Reynoso tripled to lead off the inning, she scored on an error by the Titans’ second baseman. DeWitt drove in two runs on her second home run of the day, and Kvistad scored on a wild pitch. Jordan Roberts broke the game open with a three-run home run, her second on the season.

Ocasio and Reynoso then scored on back-to-back bases-loaded walks.

Kelly Barnhill was dominant on the mound for the Gators, picking up eight strikeouts and giving up just one hit in her four innings pitched.

Katie Chronister came in to close it out for Florida in the fifth and struck out two of the four batters she faced.

Head Coach Tim Walton is proud of the way his team played today.

“I thought we did a good job of taking what was given today. We had some two-strike home runs, we had some early count home runs, but we were patient at the plate. I thought we were disciplined and we can talk about the offense and how well hit, but gosh we pitched really well today. Two good performances, one by Aleshia Ocasio and Natalie Lugo and the other by Kelly Barnhill and Katie Chronister. I’m really happy that everyone had a good chance to perform today,” said Walton. 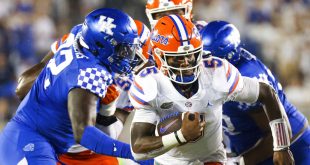