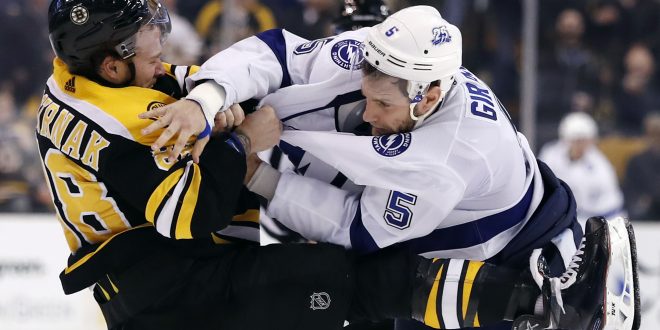 The playoff picture in the NHL is still coming into focus. Several teams in both conferences are still jockeying for positioning or even to just get into the playoff conversation.

The points separating the top half of the standings and the bottom half is as narrow as the blades on the player’s skates. While these teams beat up on each other, teams at the top are poised to make a run to capture the coveted Stanley Cup. In hockey, however, any team, no matter the seeding, can make a deep push in the postseason.

In the East, Boston, Tampa Bay, Washington and Toronto have all clinched a spot in the postseason. In the West, only Nashville, Winnipeg and Vegas have secured their spot. The rest of the playoff spots remain up for grabs.

The middle of the Eastern Conference standings is bunched up. The Pittsburgh Penguins, the defending champions and current five seed, are just two points away from falling to the seventh spot. This is because the red hot Columbus Blue Jackets, winners of 12 of their last 13, and Philadelphia Flyers are quickly closing the gap. The Blue Jackets trail the Penguins by one point and the Flyers are only down by two.

The fight for the final playoff spot is a two team race in the Eastern Conference. The New Jersey Devils currently lead the Florida Panthers, who have been playing well as of late, by three points. Even though the Devils lost 4-3 in overtime to Pittsburgh Thursday night, New Jersey maintained its three-point lead thanks to Ottawa beating Florida 3-2 in a shootout.

The action in the Western Conference lies at the bottom of the standings. Three teams are battling for the final two spots in the playoffs. The St. Louis Blue and Anaheim Ducks are currently tied for the seventh spot, with the Blues owning the tie-breaker. The Colorado Avalanche trail both of these teams by just one point.

ESPN hockey analyst Barry Melrose said any of these battling for seeding can make a push to the Stanley Cup.

Throughout the season, the Tampa Bay Lightning have positioned themselves to be the elite team in the Eastern Conference. A three game losing skid, including a 4-2 road loss Thursday night to Boston, now has Tampa Bay looking up at the top playoff spot.

Boston now holds a one point lead over Tampa Bay thanks to Thursday night’s win. The Lightning have a chance to get even with Boston and retake the right to have home ice throughout the Eastern Conference Playoffs. The two will face-off again Tuesday night in Tampa.

Melrose said he still believes the Lightning are the team to beat in the Eastern Conference.

At the start of the season, the defending champion Pittsburgh Penguins were many people’s pick to maintain possession of the Stanley Cup. Those predictions started to gain uncertainty as the hierarchy in the Eastern Conference started to take shape.

Pittsburgh has played it close recently with three out of their last four games going to overtime. They were able to escape with a victory in two of those games. The last one took place Thursday night with a overtime goal from star Sidney Crosby, securing a season series sweep of the New Jersey Devils.

The playoff picture will clear up once the regular season ends April 9th. Until then, the Lightning hope to end its three game skid and retake the top spot when they travel to New York to take on the Rangers with puck drop at 7 p.m.