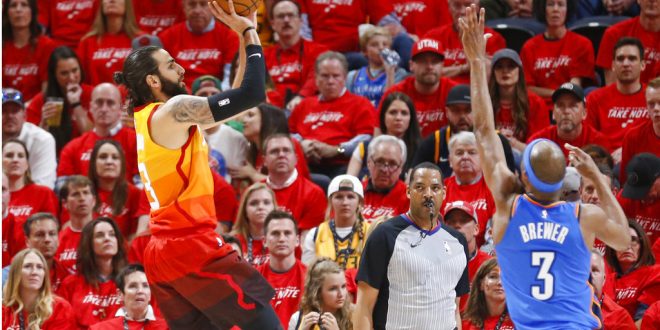 The Oklahoma City Thunder looks to even the series with the Utah Jazz at Vivint Smart Home Arena at two apiece Monday night. Utah starters scored 98 points to take a 2-1 series lead in game three after splitting the first two games. Jazz guard Ricky Rubio recorded the franchise’s first postseason triple-double since John Stockton in 2001 in game three. Despite this, triple-double king Russell Westbrook will look to play better and lead the Thunder home tied.

Ricky Rubio, who has struggled shooting in his career, outshined reigning MVP Russell Westbrook shooting 50 percent. Westbrook shot 29 percent from the court and only made three free throws. Westbrook says he is going to stop Rubio from having a similar game tonight.

“Too comfortable. But I’m gonna shut that (expletive) off next game though. Guarantee that,” Westbrook said.

Despite finishing one assist shy of a triple-double, Westbrook finished with a plus/minus of -25 in the 13-point loss. Westbrook needs to be more efficient and head coach Billy Donovan needs to make the bench more productive. However, Raymond Felton was the lone bright spot off the bench, scoring 14 points on 50 percent shooting (four were three-pointers). Other key starters Carmelo Anthony and Paul George combined for 37 points.

Donovan says the Thunder did not control the ball well enough.

Defense is just as important as offense. Without Andre Roberson, the defensive rating of the Thunder went from 109 to 103.1. If the Thunder cannot defend better as a team with Corey Brewer filling in for Roberson and an older Carmelo Anthony, then they will continue to consistently give up 100 -plus points a game. These vulnerabilities on defense also mean Oklahoma City will miss out on more points in transition.

If the Thunder can develop a better rhythm on offense and wrap up at least one or two players on Utah like rookie Donovan Mitchell from scoring, then they could win tonight and head home with the potential of being in the driver’s seat.

The starting five for the Jazz have been successful individually and demonstrating their team chemistry. Potential Rookie of the Year winner Donovan Mitchell has scored 77 points through three games, Rudy Gobert forces the Thunder into bad shots, Ingles drains shots from behind the arc and more. Utah is averaging 10.3 steals a game in the playoffs, more than any other team. Utah is also only allowing 36 points in the paint, forcing teams to make their shots instead of attacking the hoop, meaning the Thunder take less free throws.

Although the Jazz is 10th in the playoffs in the percentage of shots assisted (54.2), the Thunder sit only above the Portland Trail Blazers. Rubio says that they need to stick to their gameplan.

Utah needs to stay aggressive in the paint and force the big three of Oklahoma City to take tough shots. Utah also finished with 19 turnovers versus the 17 of the Thunder and allowed them to shoot 50 percent from the three-point line, limiting Oklahoma City from scoring off turnovers and draining threes will help them end the series in five games.