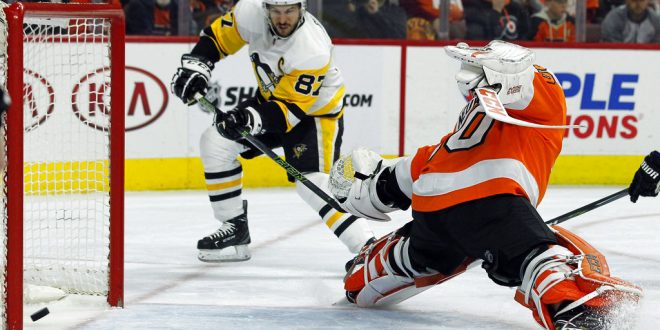 Pittsburgh Advances to Next Round

The Pittsburgh Penguins are waiting to see who they will play next in the NHL Playoffs. After clinching game 6, they are advancing to the next round in the NHL playoffs. The Penguins started round 1 off strong with a 7-0 win at home and ended the series on the road with an 8-5 victory. Last night, the Penguins won the series 4 to 2 over the Philadelphia Flyers.

Their Key to Success

The Penguins managed to clinch game 6 with the help of Sidney Crosby and Jake Guentzel. During the series with the Flyers, both Crosby and Guentzel scored 6 goals in the postseason so far, which helped the team advance to the next round. In game 6, the Penguins had a disadvantage with Evgeni Malkin sitting out but Guentzel scored 4 goals in a row which ultimately lead to the Penguins taking home the victory. According to Crosby, this kind of depth within their team is their key to success this season.

Now that round 1 is behind them, the Penguins have time to prepare for Round 2. This game was a big victory just not for Guentzel, but the whole team due to the comeback they made during the game.