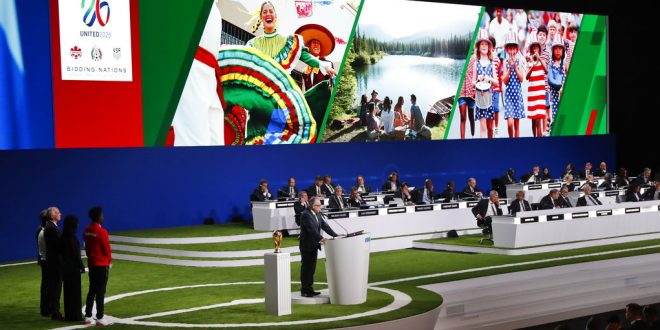 Decio de Maria, President of the Football Association of Mexico, presents a joint United bid by Canada, Mexico and the United States to host the 2026 World Cup at the FIFA congress in Moscow, Russia, Wednesday, June 13, 2018. (AP Photo/Pavel Golovkin)

Despite the U.S. not being in the upcoming FIFA World Cup in Russia, it’s still a good day to be an American soccer fan.

FIFA has awarded the 2026 World Cup to the united North American bid consisting of the United States, Mexico and Canada.

Via a joint statement from the presidents of the three federations:

“Thank you for being on this journey with us. Over the next eight years, we look forward to working together with everyone that is part of our football family—especially you and fans everywhere—to host the greatest celebration of football the world has ever seen!”

With the decision, the World Cup will return to North American soil for the first time since 1994.

Winning the bid is a big get for the United States, considering it was beat out for the 2022 World Cup by Qatar under circumstances that are now known to have involved corruption and bribery at the highest levels of FIFA.

The 2026 World Cup will be the first with 48 teams, as it is expanding from it’s current 32-team format. Because of this, there will be more host cities than usual. 16 cities across the three countries will host games, with a preliminary 23 cities being announced, including Orlando and Miami.

Out of the 80 games, Mexico and Canada will each host 10. The United States will host the other 60 games, including the quarterfinals, semifinals, and the final, which will take place at Metlife Stadium in New Jersey.