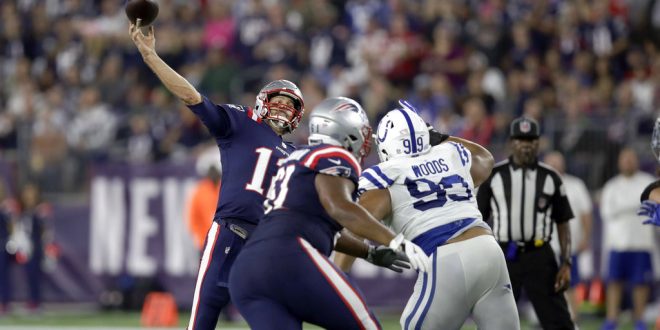 Tom Brady has just became the 3rd QB in NFL history to reach 500 career passing touchdowns. He reached this accomplishment in a spectacular performance at home against the Indianapolis Colts. A game where he threw for 341 yards and had a 110.5 QBR will be a game remembered forever.

Tom Brady’s 500th passing touchdown was actually caught by a new face to the team receiver Josh Gordon. This milestone came on a 34 yard fourth quarter heave, which was his third passing touchdown of the night. Here is the play call here!

Brady now sits at 3rd in touchdown passes only behind Peyton Manning who is at 539 and Brett Favre who is at 508. Drew Brees sits behind him at 4th with 496.

At 41 years old Brady has a chance to pass Brett Favre and move into second all time on career touch downs. This season many people will be watching him to become the second quarterback to reach 510 career touchdown passes.

Another incredible stat following the Josh Gordon touchdown, and Brady has now throw a touchdown pass to 71 different receivers throughout his career. That is also an NFL record.

Who would have known that a 6th round pick as a quarterback would result in a first ballot hall of famer. His entire career he has broken records and people have recognized him as the greatest quarterback of all time.

Reaching 500 career touchdowns helps the debate of who the greatest of all time may be. With Brady’s 45 year old retirement plans, we may be talking about him being number one on the career passing touchdown list.

Rest of The Season

Coming off a victory the Patriots are now 3-2. Brady will have some time to rest before a showdown with AFC opponent Kansas City Chiefs. The team will continue to move forward and look to improve their record this season with their MVP quarterback Tom Brady.