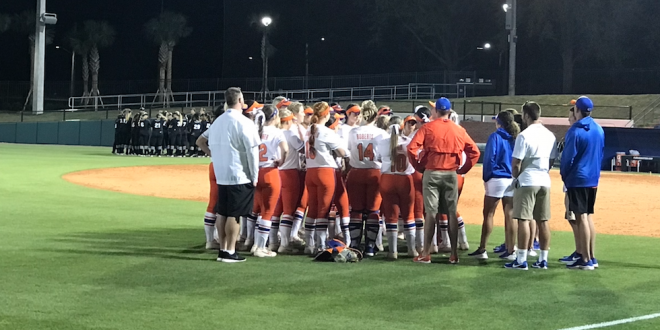 Florida’s softball team took care of UCF 5-0 at Katie Seashole Stadium on Wednesday. It was the Gators’ second consecutive victory after dropping the first two games of their series against Tennessee last weekend.

Bottom half of Florida’s lineup shines

Walton, after the game, said he was very happy with the at bats his 5-9 hitters had on Wednesday.

Infielders Sophia Reynoso (2-3, walk) and Jordan Matthews (1-3, run) also had solid nights at the plate. Besides the Gators’ eight hits, they squared a number of balls up that ended in the leather of a Golden Knight.

UCF’s starter Alea White (11-6) came into the contest with a solid ERA of 1.53. Florida simply did a fine job of jumping on the starter early. She lasted just 2.1 innings against the Gators as she struggled with command issues as she walked three while allowing three earned runs on six hits.

Freshman Breanna Vasquez actually did a viable job in relief. She only allowed one run to cross the plate in 3.2 innings despite issuing four free passes and allowing hard contact.

Already up 4-0 in the fifth, Kendyl Lindaman might’ve had a two-run home run if not for a spectacular leaping play by UCF outfielder Denali Schappacher. She didn’t quite get all of it off Vasquez though. A steady wind allowed Schappacher to time her jump at the wall and snag what would’ve been her fourth homer.

Regardless, the offensive support the Gators did manage proved plenty for the sturdy Barnhill.

Walton and Barnhill both know how good the senior wants to be — and can be.  When asked if she currently feels at her best, she smiled with hesitation.

“Getting there,” she said.

“She doesn’t want to be good, or great, she wants to be amazing,” Walton reiterated shortly after.

But Barnhill’s now thrown 13 scoreless innings after her rough frame in Game 1 against Tennessee. On Wednesday, she scattered five hits and was in cruise control for the majority of the night.

In the fifth inning, she was helped out by some poor base running from UCF and a quick throw by outfielder Alex Voss to home plate that cut off a run. It was the only real danger she faced.

Barnhill and the rest of the Gators will be eager to play their second series of SEC play this season. She’ll start again on Saturday against the Tigers.

Sports media and management student at the University of Florida. Content creator for ESPN 98.1 FM/ 850 AM WRUF.
@TheEdgarChavero
Previous Brothers help each other out, on and off the tennis court
Next The playoff-hopeful Orlando Magic lose to the Washington Wizards