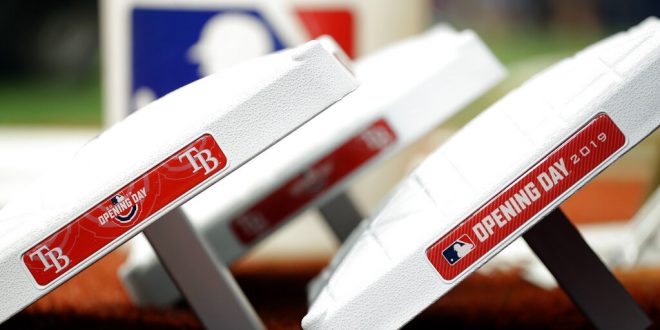 Bases sit on the field before for the The Tampa Bay Rays opening-day baseball game against the Houston Astros, Thursday, March 28, 2019, in St. Petersburg, Fla. (AP Photo/Chris O'Meara)

Rays Look to Build Off Unexpected 2018

The Rays exceeded expectations with 90 wins in 2018. But that was last season, it’s now 2019 and Opening Day. They’ll look to go even farther than before.

This was the biggest get for the Rays. Tampa Bay traded for the former Florida Gator in November along with two other players in exchange for Mallex Smith and Jake Fraley.

Yes, it gave up a budding player in Smith but added consistency and power to the catcher position.

Zunino caught 111 of his 113 games played and posted the 10th-best caught stealing percentage at almost 35 percent. He allowed just 34 stolen bases and threw out 18 runners.

At the plate, he went yard 20 times but posted his third-worst batting average at .201 and slugged only .410.

The signing of Morton helped add to Tampa Bay’s starting rotation. He signed a two-year $30 million contract on Dec. 21, 2018. With Blake Snell and Tyler Glasnow, the Rays have three starters to call on and pair with Kevin Cash’s slew of openers.

What the Experts Think

If you’re a Rays fan, you’ll see a lot of familiar faces in the field from the 2018 squad including Tommy Pham, Kevin Keirmaier, Joey Wendle and Willy Adames. The bullpen returns Ryne Stanek, Ryan Yarborough and Jose Alvarado.

This could help them build off the 90-win season a year before and maybe even slide into a Wild Card spot if not be competitive in the AL East.

ESPN polled 31 of its baseball experts who nine of pegged the Rays as a Wild Card team.

Bleacher Report slated Tampa Bay for the second Wild Card spot. It described them as “more dangerous than you think” citing the additions of Morton and Zunino along with the signing of former White Sox outfielder Avisail Garcia.

Six of Yahoo Sports’ contributors have Tampa Bay around the 80+ wins mark and only has the team snagging a Wild Card spot.

It’s a 162-game season for a reason, but this team could an entertaining one to watch in a tough division.