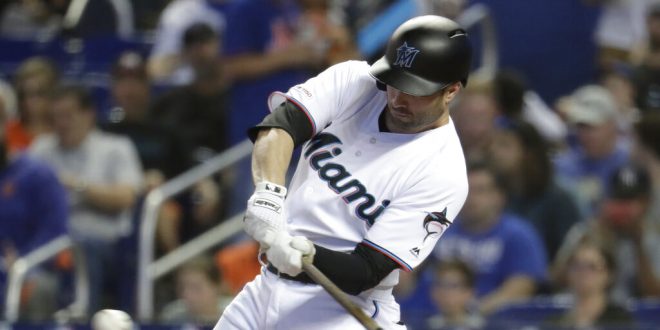 Miami Marlins' Neil Walker hits a single in the fifth inning during a baseball game against the New York Mets, Sunday, May 19, 2019, in Miami. (AP Photo/Lynne Sladky)

The Tampa Bay Rays are coming into the week at a low point after losing their series against the New York Yankees. The first game went to the Yankees, but the Rays bounced back on Saturday winning 2-1. The real disaster of the weekend came Sunday when the Yankees defeated the Rays 13-5.

The bottom of the second started with a swinging strikeout from Stanek. The Yankees would take the early lead when Kendrys Morales hit a one-run homer to right field, making the game 1-0. This homerun did not deter Stanek for long though as he came back with a popout and a strikeout to end the inning. The third inning went by uneventful, minus a pitching change. Yonny Chirinos would take over on the mound for the Rays.

Willy Adames would tie the game back up in the top of the fourth with a one-run home run of his own to left field. This is Adames third home run of the season.

The next scoring play of the game would not happen until the top of the eighth. Daniel Robertson started out the inning with a one-out double. Lowe would then get a two-out double to score Robertson from second base, making the game 2-1.

Kevin Kiermaier then stepped up to the plate and got a single. Lowe was able to score from second and Kiermaier was able to reach second after a throwing error from Gleyber Torres.

Things were looking good for the Rays. Jose Alvarado came in to pitch for the Rays for the bottom of the ninth. Voit started off the inning with a one-run homer for the Yankees. This was immediately followed by a single from Gary Sanchez. Gleyber Torres then doubled on a line drive.

With players on second and third, Alvarado committed a wild pitch, and after pinch running for Sanchez, Estrada scores from third. This tied the game 3-3. The game would end in walk-off fashion following a single from Gio Urshela.

Game two of the series was a long one as it went into 11 innings. There were only two scoring plays in regulation. The first scoring play started on a single from Brett Gardner.

His single was immediately followed by a single from DJ LeMahieu, putting runners on first and second. After a walk from Blake Snell to load the bases, a wild pitch from Snell would bring Gardner home from third for the first score of the game.

The next scoring play would not be until the top of the seventh. The Rays’ Brandon Lowe tied the with a one-run home run to right center field. This home run would bring his total on the season up to nine.

The game would stay tied 1-1 through regulation and into the eleventh inning. A late home run from Austin Medows would put Tampa Bay back on top. This would put his home run total up to nine for the season.

After bouncing back for game two, the Rays had the momentum to win the series. This would not be the case however as the Yankees end up defeating the Rays 13-5. The Rays were able to keep up with the Yankees for most of the game.

The Rays gave up a single and a walk to start the half inning. But then, after a one-out walk to load the bases, the Rays would walk Voit, making the game 6-5. The Rays would try a pitching change and brought in Stanek to help complete the inning. After an intentional walk to Gary Sanchez, another walk was issued to the Yankees, walking in a run.

After another single that scored another run, the Rays would try another pitching change and brought in Casey Sadler. This would not be the answer either, as back-to-back doubles for the Yankees soon followed, making the game 12-5.

Things went a better for the Miami Marlins this weekend as they swept the New York Mets. This was a great bounce back for the Marlins after they had just lost two games to the Mets the weekend before.

There were lots of scoring in the first game of this series. Peter Alonso began the game with a one-run homer in the top of the second to put the Mets up 1-0.

During the bottom of the third, however, the Marlins would do some scoring of their own. After Miguel Rojas reached on a fielding error from the Mets, Trevor Richards performed a sac bunt to move Rojas to second and into scoring position. Jon Berti would then single, moving Rojas to third.

After Rojas stole second, a single from Garrett Cooper would score both runners on base. This gave the Marlins their first lead at 2-1.

PER THE ADVICE OF TWITTER, we have scored two (2) runs. #JuntosMiami pic.twitter.com/rYyRnkaQvo

The Marlins would tack on two more runs during the bottom of the next inning. A leadoff double from Starlin Castro started the half inning. He would then be brought home after a single from Jorge Alfaro. Rojas then recorded a single of his own to bring home Alfaro, giving the Marlins an even bigger lead at 4-1.

The Marlins were able to tack on another three runs during the bottom of the next inning. After a single from Cooper, Brian Anderson doubled to bring him home for the Marlins fifth run of the game. Alfaro then homered, adding another two runs.

The next game features less of the flashy scoring from the first. In fact, all of the scoring for the game came in the first three innings. In the bottom of the first Jon Berti got a one-run homer to give the Marlins the early lead. The only other scoring drive of the game would come in the bottom of the third. Berti was walked by the Mets, putting him at first.

Later, a groundout by Cooper advanced Berti to second. Brian Anderson would then single to right field and Berti would score from second, extending the Marlins’ lead 2-0. This is where the score would stay throughout the rest of the game.

Game three was also a low scoring game. However, all of the runs came at the end of the game. This game would also be another shutout for the Marlins. To start the bottom of the sixth, Rosell Herrera doubled to right field.

Sandy Alcantara then singled on a bunt towards third base, advancing Herrera to third. Curtis Granderson then grounded into a double play, but Herrera would still score from third.

After a sac-fly from Rojas, Walker would score from third, making the game 2-0. The last score of the game would come from Granderson on a solo home run to make the final score 3-0.