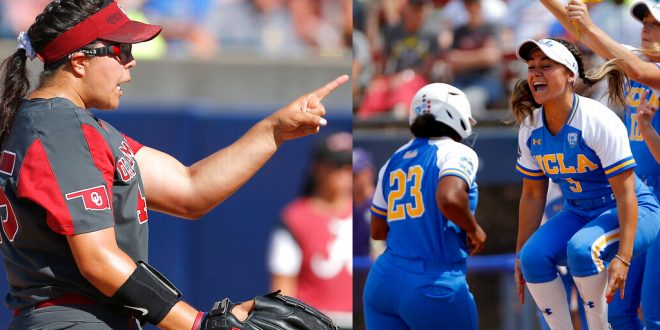 After eight teams battle it out in Oklahoma City, only two remain.

The Oklahoma Sooners will take on the UCLA Bruins in a best of three series. This will be the first time since 2005 that the top two national seeds will meet. The series starts tonight at 7:30 ET on ESPN.

Oklahoma defeated a strong Alabama team 7-3 to secure a spot in tonight’s finals. Jocelyn Alo hit a huge home run in the fifth inning to give the Sooners a 4-1 lead and the spark her team needed to defeat the Crimson Tide. The Sooners closed the game out in the bottom of the six and sealed the deal with Nicole Mendes’ two-runner homer and Grace Lyons’ solo blast.

“Once Jocelyn hit that home run, it was like a spark was ignited,” Mendes said. “Once this team gets a spark, it’s really hard to stop us. Definitely made us a lot more free, kind of got the ball rolling.”

Oklahoma is seeking to win their third Women’s College World Series title in four years and their fourth championship this decade.

UCLA shutout Washington 3-0 thanks to Rachel Garcia’s big performance on Sunday. Garcia hit a three-run home run to left field in a game of extra innings. The Bruins made the semifinals last year only to come up short to the Florida State Seminoles, who would go on to be the national champions.  A memory Garcia carried with her to dig deep and defeat Washington.

“She wasn’t gonna let that happen again,” Inouye-Perez said. “And I think that’s what it comes down to, your ability to stay convicted. This team never gave up.”

UCLA as a program has won 12 national titles. The Bruins have avenged their semifinals loss from last year and look to take home their first national title since 2010.