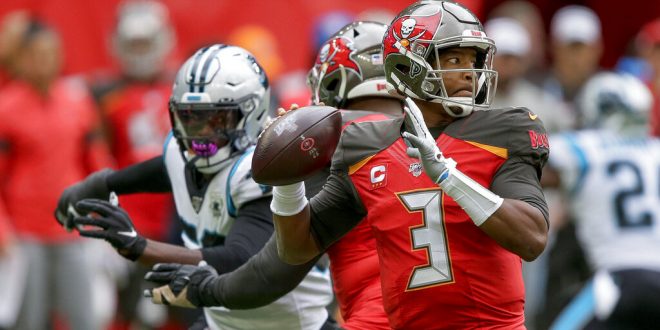 It was a promising start to the season for the Tampa Bay Buccaneers. The Bucs sat at 2-2 through the first for weeks with good wins over the Panthers and Rams. Tampa almost snagged a win over the Giants in week three as the Bucs were up 28-10 at halftime. The team seemed improved over last year. After that, though, the waters became rough. Tampa Bay lost five of its next six games. For a majority of this decade, Bucs’ fans have been trying to find something to cheer for and this season hasn’t helped. At 3-7, the postseason hopes for the team are almost gone.

The Atlanta Falcons play host to Tampa Bay this week with the exact same record but different momentum. Atlanta started the season 1-7 but has won its last two games since. Despite the slow start, head coach Dan Quinn says the team is still attacking each week just as hard.

The defense has stepped up in a big way allowing a combined twelve points against the New Orleans Saints and Carolina Panthers. How will the Bucs’ talented offense stack up against a surging Falcons’ defense?

Jameis Winston has enough talent to become a franchise quarterback. The problem is his occasional poor decision making has overshadowed that talent. Tampa Bay had the top passing offense last season and is on pace this year to finish in the top five in the passing game for the third straight year.

However, Winston had the most interceptions in the NFL last season and currently has four more than any other team this season. This high turnover rate is why the Bucs struggle to break into the win column despite having high offensive numbers. The defense is on the field too often trying to stop a team in good field position. If Winston can consistently make wiser throws, Tampa Bay can put itself in a good position to win. Winston only had one pick in the two early season wins.

Somehow, someway the horrendous Falcons’ defense has done a complete turnaround.  Through the first eight weeks, Atlanta allowed over 31 points per game leading to a 1-7 record. Matt Ryan, Julio Jones and Devonta Freeman could only provide so many points. A bye week and a few positional adjustments were apparently all the team needed.

Damontae Kazee returned to free safety, his position last year when he tied for the most interceptions in the league.

Because of this, Ricardo Allen slid over to strong safety and has excelled in that position. He has come up with some clutch solo tackles, registering four in each game. The key to this improved secondary play could be the increased pressure the Falcons have gotten on the opposing signal-caller. Atlanta recorded eleven sacks in the last two games after just seven up to that point. Tampa Bay Head Coach Bruce Arians realizes this is an improved defense.

It will be interesting to see how this pressure affects Winston, who is already prone to throwing interceptions without defenders breathing down his neck.