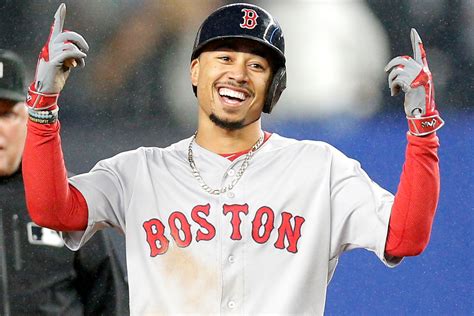 That trade has rocked the baseball landscape.

Details of the trade

Three teams and five players are involved in this trade. In exchange for Betts and Price, young outfielder Alex Verdugo is heading to the Red Sox.

The Twins, the third team in the trade, sent 21-year-old pitcher Brusdar Graterol to the Red Sox. The fifth player involved is Dodgers’ pitcher Kenta Maeda who moves to the Twins.

Recap of what has been reported in tonight's blockbuster:

Red Sox reportedly get OF Alex Verdugo (from Dodgers) and RHP Brusdar Graterol (from Minnesota).

Betts, who was drafted by the Red Sox in 2014, played six seasons for them and won an MVP in 2018, which helped propel them to a World Series win. Betts is owed $27 million this year, but will test free agency after 2020 looking to land a monster deal.

Price, who the Red Sox signed in free agency in late 2015, had an up and down tenure in Boston. At his best, he’s one of the best pitchers in baseball. But at his worst, he’s inconsistent and a health liability. Price has three years left of his initial seven year deal, with $96 million total owed to him. The Dodgers have agreed to pay $48 million of that, while the Red Sox will pay the other half.

Alex Verdugo is the highlight of this trade for the Red Sox. At just 23 years old, Verdugo has played parts of three seasons for the Dodgers, though last year was his largest sample size. He played in 106 games and had 343 at bats last year, hitting .294 with 12 home runs and 44 runs batted in. Verdugo is primarily a contact hitter, but the Red Sox will likely try to get more pop out of his bat.

Verdugo’s best attribute other than his knack for hitting for average, is his fielding. He is a good fielder with a great arm who can play every outfield position. He is primarily a center fielder, but the Red Sox have Jackie Bradley Jr. for that role. Verdugo will likely take Betts’ position in one of the toughest right fields in baseball.

This trade has affected more than just the AL East and NL West, though. This trade may just have sent the Dodgers on a collision course with the Yankees that are projected to be the favorites in the AL this year.

That early exit gave the Dodgers more motivation to make some waves after three straight disappointing years by their standards. In 2017 and 2018, they made it to the World Series, but lost both times on their home turf against the Astros and Red Sox.

After helping beat the Dodgers in 2018, Betts and Price join them with hopes of winning another title in 2020.

This offseason has been a wild one for the Red Sox. After their own scandal was uncovered amidst the Astros’ cheating scandal, they were forced to fire manager Alex Cora. Cora was the bench coach for the Astros in 2017, the year they are accused of cheating during. According to the Astros, Cora was the mastermind behind the cheating scandal.

They traded Betts to get under the luxury tax, but will likely offer him a contract after this upcoming season.

This trade has likely put the Red Sox out of contention in the AL East, but Bloom will continue to make moves in hopes of getting the Red Sox back to their winning ways.

Dodgers’ president of baseball operations Andrew Friedman hopes this trade will get the Dodgers a long-sought World Series win.

My name is Caleb Mikita, and I am a telecommunications major at the University of Florida from St. Pete, FL. I am a fan of all things sports, but my main passion is baseball. My long term goal is to become a sports analyst or writer for MLB Network.
@@caleb_mikita8
Previous Mullen talks National Signing Day
Next Drake Group Advocates Changing College Athletics