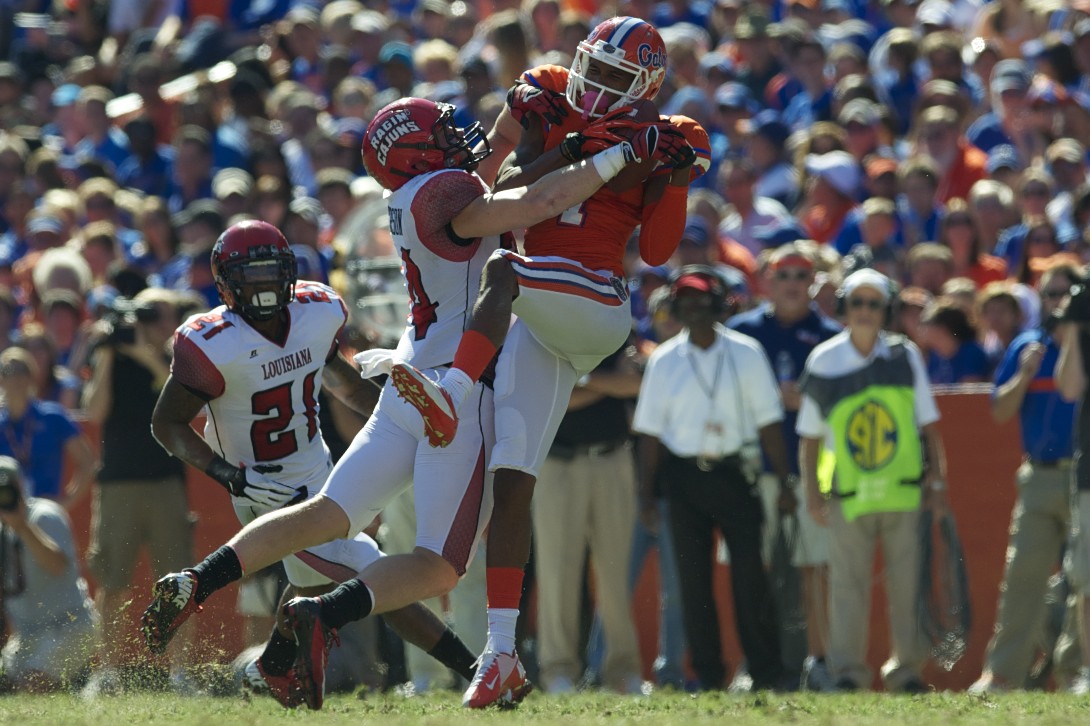 Wide receiver Quinton Dunbar (1) gets a first down for the Florida Gators in the first half of Saturday's game.

Former Gator and current Washington Redskins cornerback, Quinton Dunbar, has requested to be traded or released from the team.

Dunbar is entering the final year of a three-year, $10.5 million deal he signed before the 2018 season. The undrafted free agent joined the Washington Redskins in 2015 as a wide receiver, but was converted to cornerback. The 27-year-old has been compared to Richard Sherman in his young career, and it is easy to see why. His size – 6-foot-2, 202 pounds – and cerebral approach to the game are similar to the All-Pro in San Francisco.

Just spoke with Quinton Dunbar. He has requested a trade from the Redskins. “I don’t know them and they don’t know me. It is what it is.” Wants to play for a team that will commit long-term.

This offseason has seen a lot of flux in the front office for the Redskins. Ron Rivera took over as the head coach and longtime front office executives, Erich Schaffer and Bruce Allen, were fired. Contract negotiations were underway between Dunbar and the old regime, but have gone stale since the shake-up. In fact, Schaffer and Allen were close to presenting Dunbar with an offer, a source told The Washington Times.

Negotiations with Dunbar have reportedly gone stale under the new regime. Dunbar was planning to hold out of OTA’s to avoid injury while he negotiated his contract. However, a trade request is an escalation and does not bode well for the Redskins’ chances to re-sign him.

Dunbar was set to make $3.5 million next year, all of which is not guaranteed.

Washington and Coach Rivera have a lot of options. With that one year of control left, the Redskins can opt to hold on the Dunbar or look to trade him. He won’t be cheap, however. Dunbar wants to be paid like the top cornerbacks in the league and he has the numbers to back it up. Pro Football Focus ranks Dunbar as the 2nd best player at his position, only behind Sherman.

One option is to cut Dunbar’s partner across the field, Josh Norman. The 32-year-old is the 2nd-highest paid cornerback in the league at $15 million, but has not lived up to the price tag. While fighting a hamstring injury for most of the 2019 season, Norman was benched in a game against the Lions.

Rivera was at the helm of the Carolina Panthers when Norman was one of, if not, the best cornerback in the league. The organization may be holding out hope that the relationship could also turn back the clock for Norman.

Norman has one year left on his deal, but the team could save $12.5 million against the cap if he is cut before June 1st. That money could be invested into Dunbar.

A Dunbar trade would most likely bring back a nice haul for the Redskins. Only one year left on his contract and a history of injuries may diminish Dunbar’s value to a point that a deal could work with multiple teams.

Some may look at the return the Jacksonville Jaguars received when they traded Jalen Ramsey to the L.A. Rams as an outline for a Dunbar trade. The Jaguars return included two first-round picks and a fourth. This may be too high for Dunbar, who has not had the sustained success that Ramsey has had. Dunbar has also fought the injury bug his whole career (played 18 games in two years.)

A source told ESPN that Dunbar would play out the final year of his contract, even if that season is with the Redskins. However, it is up to Rivera and the new regime to decide if they want his contract uncertainty hanging over their head.