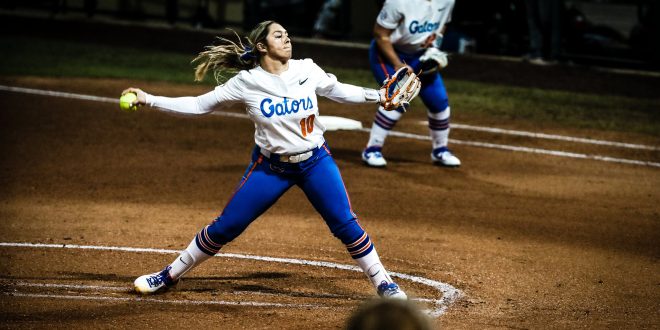 Alyssa Bilodeau, however, did not for Jacksonville.

Bilodeau failed to record an out in the first inning; she gave up three runs, which raised her ERA from 1.40 to 2.60.  Junior Hannah Adams led off and drew a walk. Next up, senior first baseman Kendyl Lindaman took two strikes and then stroked a ball to left-center field. for a two run home run.  Sophomore Charla Echols followed suit, hammering a solo moonshot that cleared everything. The ball trickled into the street, well beyond the right-field wall.

Back-to-back homers by Lindaman and Echols marked the first such instance for any Gators this season. They also gave Florida an early 3-0 lead.

Gator head coach Tim Walton noted that Lindaman and Echols set the tone for the offense.

Lugo lights it up

When Lugo entered the circle to face Jacksonville, “Gasolina” played throughout Pressly Stadium. Lugo proceeded to throttle her way through the Dolphins’ lineup.  She nailed a batter in the foot with the first pitch of the game. Despite the hiccup, Lugo only faced two batters over the minimum in the contest.

She mowed down nine of them by way of the strikeout, including all three batters in the third inning.

LUGO STRIKES OUT THE SIDE! Buss comes up empty.

The Gators built the lead to eight by the top of the fifth inning as Lugo retired Jacksonville hitters in order to complete the run-rule no-hitter.

She joined freshman Rylee Trlicek as the second Gator pitcher to throw a no-no this season. The feat also gave Lugo the first complete game no-hitter of her career. Kelly Barnhill and Lugo combined for one against Boise State last year.

Walton discussed the possibility of Lugo being tabbed as the ace of the team.

After the 8-0 loss, Jacksonville (7-4) travels north to face Stephen F. Austin and South Alabama on Friday.