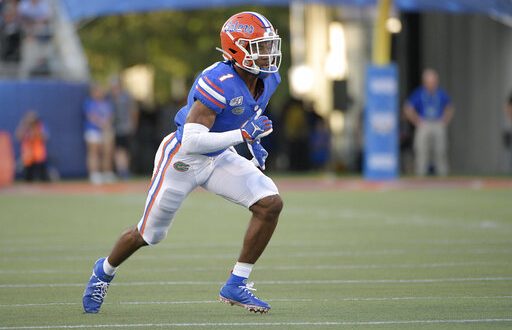 Florida defensive back CJ Henderson (1) rushes the line of scrimmage during the first half of an NCAA college football game against Miami Saturday, Aug. 24, 2019, in Orlando, Fla. (AP Photo/Phelan M. Ebenhack)

The 2020 National Football League Draft will look a little different come the first round on April 23. In order to comply with the regulations created in response to COVID-19, the league is holding the draft virtually.

A New Kind of Draft

Furthermore, Goodell will announce the first-round picks on a live stream taking place at his home in New York.

In a typical draft, an NFL franchise focuses on strategizing which players to select. However, in a virtual draft, teams will now have to focus on strategy in addition to technology.

BREAKING: 58 prospects to virtually participate in the 2020 NFL Draft.https://t.co/NZwFeUfyA7 pic.twitter.com/vqUZqkxPKU

According to ESPN senior NFL reporter Jeremy Fowler, the NFL sent the 58 players participating in the draft webcams and “production quality” lights. Furthermore, former Florida defensive back CJ Henderson, a projected first round pick, is one of those players.

The league is asking players to use this equipment to capture their reactions.

In preparation for the virtual draft, NFL franchises will have to focus on overcoming any obstacles to communication in the post-draft process.

However, after the draft, all the focus shifts to making decisions regarding undrafted players. According to Fowler, this process requires a large amount of teamwork among NFL franchises.

Florida Gators in the Draft

The 2020 NFL Draft will include offensive and defensive standouts from Florida. In March, eight Gators were invited to participate in the NFL Combine.

The Florida defense was represented by Henderson and defensive ends Jonathan Greenard and Jabari Zuniga.

Here is a complete list of draft prospects from Florida:

The draft will begin on April 23 and continue until April 25.

Previous XFL Suspends All Operations; No Plans for a Return in 2021
Next Boselli Family Overcomes COVID-19