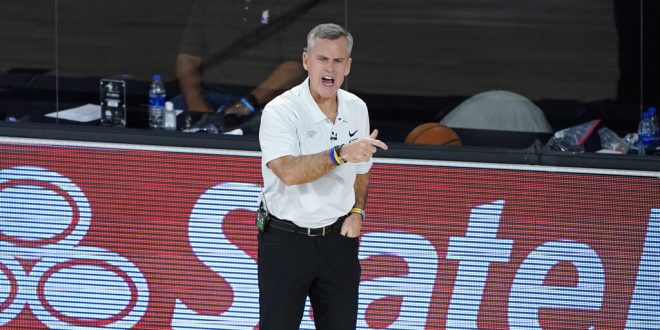 After five seasons with the Oklahoma City Thunder, head coach Billy Donovan will not be returning next season.

Donovan and the team signed a five year contract in 2015 that ended this year and both sides decided to not extend the contract. This exit could start the rebuilding phase that the Thunder have hinted at.

In those five seasons, Donovan led the Thunder to a winning record and had a winning percentage of more than .570 each year.

However, the question still remains; where will Donovan land next?

Sean Deveney, who writes for Heavy.com and covers the NBA, came on the Sportscene with Steve Russell show to hear his take on the Donovan coaching situation.

The Sixers fired Brett Brown on August 24 and up until now, their leading coaching candidate has been Los Angeles Clippers assistant Ty Lue. However, that was before Donovan became available.

One of Brown’s fatal flaws was his inability to change things up. Donovan has already proved though that he will not fall victim to the same mistake. In the five seasons he spent in Oklahoma, he had a mix ranging from star-studded veterans to players who went undrafted that he coached well.

The next head coach of the Sixers will have some big-name players with Joel Embiid and Ben Simmons. This is something Donovan has plenty of experience of after coaching players like Chris Paul, Paul Goerge, Kevin Durant and Russell Westbrook. The 76ers have also conducted serious conversations about trading for Chris Paul, and having Donovan could make that transition simple.

Not to mention that an old Florida star, Al Horford, is also in Philadelphia.

Should Donovan head to Indiana, the situation would be similar to the one in Philadelphia, but perhaps with not as much star power.  The Pacers are missing one of those big named stars that could help bring them full circle and if they want a different outcome than the one they had with former coach Nate McMillan, they will have to work hard to secure top talent.

While there are quite a few coaching candidates for the Bulls, having Donovan as an option now certainly changes things up.

Donovan separates himself from the rest of the coaching pool with his experience level. However, it is speculated that he parted ways with the Thunder because he did not want to take part in a full rebuild, which is right where the Bulls are as well.

The Bulls also have a young core, which Donovan has proved he can develop in the past. However, they also lack a true star so it could be more of the same situation as Indiana.

Deveney also floated the idea of the Houston Rockets as a landing point for Donovan should they part ways with coach Mike D’Antoni.   Remember, Russell Westbrook is on that team, and he’s a guy Donovan coached in OKC.

It will be certainly interesting to see where Donovan will land for his next coaching gig.