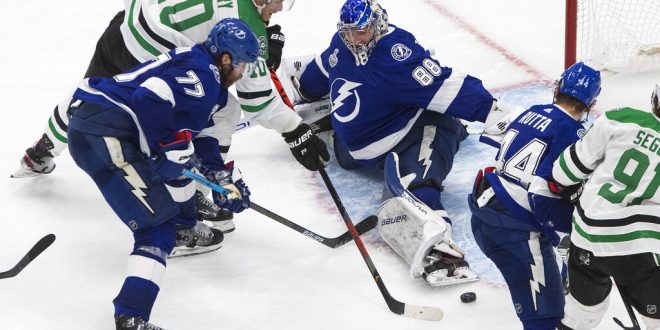 The 2020 Stanley Cup Finals have been very eventful, and it could end tonight with a Lightning win over the Stars. The Lightning are the favorite in this Game 6 after the Stars pushed to continue the series with a 3-2 OT win on Saturday.

Dallas trails the Tampa Bay Lightning 3-2 in the series. The Stars won the previous game, but they still have to win two more against a tough Lightning team.

Bowness said of tonight’s game, “you can’t worry about facing elimination. You have to worry about taking care of the process.”

Dallas can rely on center Joe Pavelski who has a shooting percentage of 22.0% through the 2020 postseason. Both teams, however, have star goalies to try to score on. Both teams’ goalies have save percentages over 91%.

How the Lightning can win the Stanley Cup

Tampa Bay’s head coach Jon Cooper has been happy about how his team has responded to losses through this postseason. The Lightning are 6-0 in games following a loss in this postseason.

Cooper also spoke highly of the players stepping up with the team’s captain, Steven Stamkos, out of the lineup. Cooper said the leadership “has been exceptional. So many guys have really grown in that role.”

Cooper said “Winning is contagious. Guys that have won before know how to do it.” The Lightning have nine players on their roster that were with the team during their last Stanley Cup appearance in 2015. The Lightning can rely on those players to teach the young and new players what they learned and help them win it this year.

One of those players is Nikita Kucherov who is responsible for 33 points this offseason, the highest on the team. Fourth-year center Brayden Point has been responsible goals for the lightning this postseason with 13.

Jensen Young is a journalism student at the University of Florida. He works as a sports writer for WRUF.com and is the voice of trendings on Monday afternoons on the WRUF radio station.
@Jensen_Young9
Previous Bam Adebayo leads Heat to NBA Finals for the first time since 2014
Next Florida soccer ties Georgia in season opener