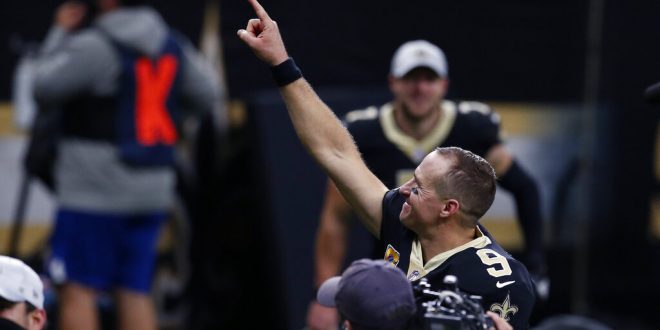 The New Orleans Saints appeared down and out after falling behind 20-3 to the Los Angeles Chargers late in the second quarter.

Drew Brees had completed just seven of his 15 passes for 43 yards and an interception before catching fire in a two-minute drill at the stroke of halftime. He drove the Saints down the field quickly and punched it in himself from the one-yard line to give New Orleans its first touchdown of the game.

The 41-year-old quarterback didn’t stop there, however.

Brees went 21 of 25 for 232 yards and a touchdown through the air in the second half (including overtime), catapulting the Saints to a 30-27 victory against the Chargers on Monday Night Football at the Mercedes-Benz Superdome. The future Hall of Famer had lost 48 of his previous 49 games when trailing by 17 points or more.

FINAL: The @Saints come back to win in OT! #Saints #LACvsNO

Why the Saints won

New Orleans had no answer for Los Angeles quarterback Justin Herbert in the early going.

The rookie out of Oregon hit on nine of his 13 passes for 109 yards and three touchdowns in the first half, showing off his athleticism and arm strength on the national stage.

Herbert’s first touchdown pass came at the 6:26 mark of the opening quarter when he scrambled to his right to avoid the rush and fired a 17-yard strike to wide receiver Keenan Allen. Then, Herbert found wide receiver Mike Williams and tight end Hunter Henry for four- and three-yard touchdowns, respectively, to extend the Chargers’ lead to 17.

The Saints defense limited Herbert’s production later in the game, though.

Herbert struck on just 52.4 percent of his passes (11 of 21) for 155 yards in the second half and overtime, with 64 of those yards coming on a touchdown pass to Williams in the fourth quarter.

It was going to be hard for New Orleans to win at the rate in which Herbert was playing at the beginning. But the team’s second-half adjustments on the defensive side of the ball complicated things for the sixth overall pick of the 2020 NFL Draft.

Why the Chargers lost

Los Angeles hasn’t had much luck in close games dating back to last season.

Coach Anthony Lynn’s team lost nine games in 2019 by one score. And with Monday night’s three-point loss, the Chargers have now squandered four such games in 2020.

The result may have been different if it wasn’t for Michael Badgley.

Badgley, who had converted 85 percent of his field goals and 98 percent of his extra points coming into the game, missed two kicks against the Saints that proved crucial. His extra point after Los Angeles’ first touchdown sailed wide right, and his 50-yard field goal on the final play of regulation hit the upright.

Lynn acknowledged Badgley’s kicking mishaps after the game, but he also noted that it wasn’t the only reason for his team’s defeat on Monday.

The Saints and Chargers both have byes in Week 6, so they will get some much-needed time to rest before hitting the field again.