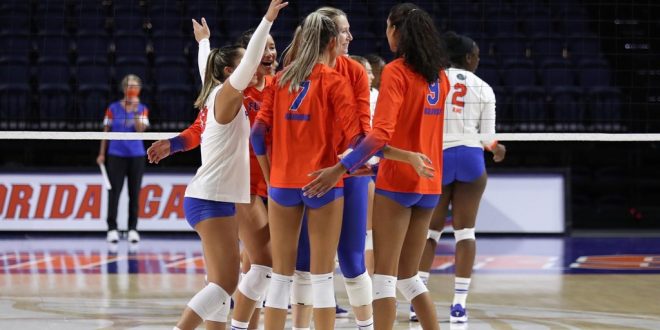 Florida Volleyball Adds Another Sweep In The Books During Home Opener

Florida Gator volleyball won its home opener in three straight sets against Alabama on Friday night 25-18, 25-22, and 25-18. The two-match series will continue Saturday at 3 P.M.

Let's keep this going next week vs Alabama on Oct. 30th @OConnellCTR!! https://t.co/2JnXPhPQIY

The Florida Gators have not been able to play a home match since December 6th, 2019 in round two of the NCAA Tournament. After applying COVID-19 regulations, the Exactech Arena is still able to seat up to 2,500 people. Outside Hitter Thayer Hall explained that the team was beyond excited to be back on their home turf.

“It was definitely worth the wait. It felt so good to be back at home. Seeing people in the stands and it was so fun to see faces that I didn’t recognize,” said Hall.

Gator coach Mary Wise added that she is thankful that they have a stadium large enough to enable a sense of normality this season.

Three Sets Is All It Takes

Alabama started off with the serve in set one of the match. The score went back in forth and Florida struggled to maintain a solid lead until Holly Carlton went on a serving run and helped put her out in front. In addition, Thayer Hall contributed seven kills and two digs to the set.

The second set was much rockier. Florida and Alabama were neck to neck for the vast majority of the game. The Gators could not break away until the score was at 18-18. According to Wise, Alabama stepped up in the second set and made it a challenge.

“In the second set, they played such a clean set. That’s one of the reasons that that set was so close. We were scoring points but also making mistakes and scoring some for Alabama,” said Wise.

Finally, in the last set, Florida was aiming for a third win to achieve a clean sweep. This time around, Florida broke off into a small lead right away and maintained it throughout the match. Up on the leaderboard, Thayer Hall contributed 19 kills and a .472 hitting average and T’ara Ceasar added 13 kills for the match.

Florida’s offense can also be largely contributed to setter Marlie Monserez. Monserez racked up 38 assists for her hitters overall. According to Ceasar, Monserez has taken over the role of an offensive leader.

“Marlie is thriving in that role. I’m so proud of her and happy I get to play with her,” explained Ceasar.

Florida is back at it Saturday for a Halloween match with Alabama at 3pm.  After the conclusion of the match, the Gators will be halfway through their 2020 season. The 2020 SEC volleyball season consists of eight-matches that are conference-only, with each school competing against four opponents on back-to-back nights.