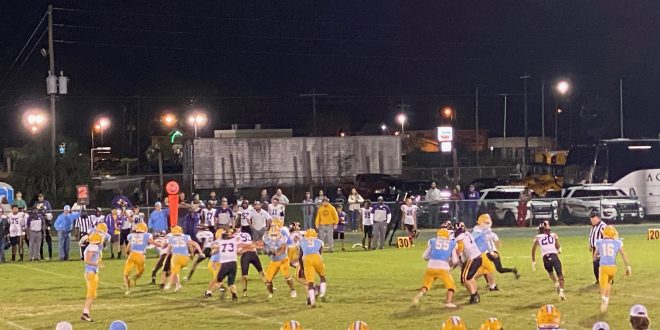 The Indians final play in the fourth quarter, leading #23 Paul Davis to score the Indians only touchdown. (Image from Kaitlyn Wadulack)

The Class 1A Chiefland Indians (1-6) suffered their fourth consecutive defeat after their game against the Class 1A Union County Tigers (5-3).

The Indians defense struggled the entire game to contain the Tigers offense, leading the Tigers to a 42-7 victory.

It was a slow start for both teams offensively. About halfway through the first quarter, Union County was getting close to the end zone. The Tigers fumbled their snap, allowing the Indians to recover the ball at their own 15-yard line. The Indians suffered multiple incomplete passes and were struggling to produce any offensive plays. The Tigers took that to their advantage. Seconds before the end of the first quarter, Union County gained good field position after a 20-yard pass from quarterback AJ Cortese to running back BJ Harvey. At the end of the first quarter, both teams were scoreless.

The Indians attempted to produce something offensively following this touchdown, but a bad snap left Chiefland on fourth and long. Union County got the ball back and used the momentum from their first touchdown to drive down the field. Facing a fourth and five, Union County went for it, and Cortese was able to complete a pass to wide receiver Cortez Slocum. for a first down. Running off this adrenaline, Cortese tossed left to Covey, who scored his second touchdown of the night. The score was now 14-0 Tigers with 2:49 remaining before halftime.

Manny Covey scores his second rushing touchdown of the night for the Tigers as Union County extends their lead to 14-0 over Chiefland. 2:49 remaining in the first half. @ESPNGainesville

After receiving the ball back, Chiefland couldn’t get a first down. A short punt left the Tigers deep in Indian territory. On second and 10, Cortese threw an interception to Chiefland’s defensive back Paul Davis. This prevented the Tigers from increasing their lead even further. At the end of the first half, the Tigers were up 14-0.

Coming out of the locker room, the Tigers immediately took advantage of the struggling Indians’ defense. Cortese took the Tigers down the field and finished off the drive with a four-yard touchdown run to extend the Tiger lead to 21–0. Later in the quarter, Tiger running back Jacoby Edwards extended the lead to 28–0 with a short rushing touchdown.

On the Tiger kickoff, it seemed as though Chiefland would be able to get on the board, as Indian running back Paul Davis returned the kickoff 70 yards to set the Indians offense up at the Tiger five-yard line. However, Indian quarterback Austin Berry threw an interception to Tiger cornerback Cortez Slocum, who ran it back 100 yards for another Tiger touchdown. The Tigers extended their lead to 35–0 with 3:54 remaining in the third quarter.

It was a big third quarter for @UCH_Football scoring 21 points against @ChieflandFtbl. Tigers lead 35-0@ESPNGainesville

In the fourth quarter, Edwards managed to score his second touchdown of the night on a 20-yard run to make the score 42–0 in favor of the Tigers.

The Indians were able to get on the board in the final minute of the fourth quarter when Davis ran in for a 20-yard touchdown to make the score 42–7, which was the final score when the final whistle sounded.

Chiefland next plays the Williston Red Devils (2–6) on Friday at 7 pm at home.

Kaitlyn Wadulack is a second-year Journalism student specializing in Sports and Media at the University of Florida. You can reach Kaitlyn at k.wadulack@ufl.edu.
Previous Florida Volleyball Adds Another Sweep In The Books During Home Opener
Next Eastside Upsets Santa Fe as Coach DeLeon Wins his First Game