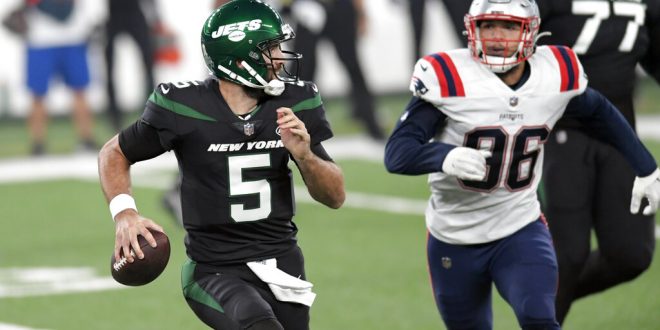 The New York Jets are now 0-9 after not being able to hold on to their lead against New England. This record sets the worst start in franchise history.

The Jets entered the fourth quarter in the MetLife Stadium looking like they were going to get their first win of the season.

Their closeness to victory was led by quarterback Joe Flacco who threw 262 yards and three touchdowns. But an interception in the fourth quarter doomed New York’s chances of getting their first win of the season.

Patriots’ cornerback J.C Jackson was responsible for the pick. The pass was intended for wide receiver Denzel Mims. If caught, Mims would’ve gotten the first down and a chance at the endzone.

This interception by Jackson set up the Pats for the opportunity to cut the Jets’ 27-17 lead — and they took that opportunity.

After this, Pats quarterback Cam Newton was able to get his second rushing touchdown of the game. The Jets were not able to produce anything in their drive, so the Patriots got the ball back. With a tied game and time running out, they had to rely on a field goal to win.

The pressure was on Patriots –and former Jets — kicker Nick Folk.

Newton and the Pat’s offense did the best they could to set up the offense at a comfortable field goal range. They positioned themselves on a tricky 51-yard field goal. But Folk still managed to make the field goal, getting him and his team the win.

Despite not being in the lead, the Patriots’ offense was executing their plays properly. The New York Jets defense was just executing a little bit better.

The difference is that New England’s offense continued their proper execution throughout the whole game.

With Flacco’s hot hand, the Jets were well on their ways to achieve a comfortable win. They led for most of the game, and their 10-point lead heading to the fourth quarter gave them a little room to work with.

But after the interception, it seemed like all of the Jets’ effort to get a stop were unsuccessful.

After the interception, the Jets were not able to get any key stops which led to the Newton TD that tied the game. This was after the defense was able to hold the Pats offense at 17 points for the first three quarters.

Jets’ head coach Adam Gase said this is an issue that needs to be fixed.

Gase also went on to say that this inability to close out games “hurts” as the “guys gave everything they had”.

The New York Jets will get a bye week. After that, they will travel to Los Angeles to face Justin Herbert and the LA Chargers on Sunday, November 22nd. Kickoff for this game is 4:05 pm.

As for the Patriots, they will host Lamar Jackson and the Ravens on Sunday. Kickoff is set for 8:20 pm.

Camila is a senior at the University of Florida, who served as a beat writer for the women's basketball team from 2019 until the 2021 season. She was also a beat writer for the Gators football team during the 2020 season. Camila is also WUFT's news director as well as a sports reporter/anchor.
@CamilaMaffuz
Previous The Winless New York Jets take on the New England Patriots in Monday Night Football
Next Florida Center Jason Jitoboh Previews Gator Basketball