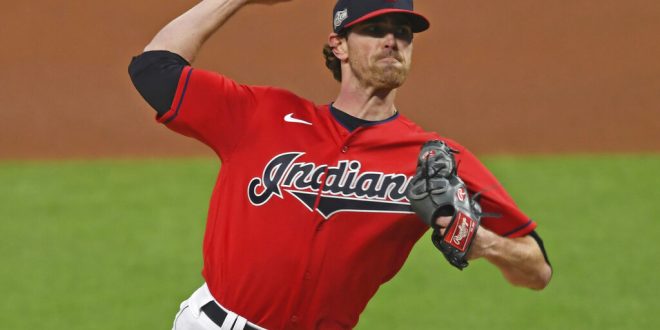 FILE - In this Sept. 29, 2020, file photo, Cleveland Indians starting pitcher Shane Bieber delivers in the first inning of Game 1 of an American League wild-card baseball series against the New York Yankees in Cleveland. Jacob DeGrom could join Randy Johnson and Greg Maddux as the only pitchers to win at least three consecutive Cy Young Awards. But Trevor Bauer had an NL-best 1.73 ERA in 11 starts for Cincinnati, and Yu Darvish went 8-3 with a 2.01 ERA in 12 starts for the Chicago Cubs, matching Indians ace Bieber for the major league lead in wins. (AP Photo/David Dermer, File)

He becomes the fifth Indians pitcher to collect a Cy Young award, and the first unanimous winner in franchise history. His former Indians teammate Trevor Bauer, now with the Reds, took home the award in the National League this year.

Shane Bieber is your 2020 American League Cy Young Award winner, and there was never a doubt.#OurTribe pic.twitter.com/uSrksMhM39

Bieber was by far the best pitcher in baseball during the shortened 60-game season. Leading the league in wins, strikeouts and earned run average, Bieber became the first pitching Triple Crown winner since 2011.

His numbers this season were well-deserving of a Cy Young award:

There was never a doubt with numbers like these. pic.twitter.com/MIGiW8Z2iR

Bieber’s 14.2 strikeouts per nine innings was the highest single-season ratio in MLB history, though in a shortened season. He posted double-digit strikeouts in eight of his twelve starts, holding batters to a .167 batting average.

His stellar season follows a bright sophomore campaign, where he finished fourth in Cy Young voting and had 259 strikeouts.

Bieber helped the Indians secure a wild-card berth against the Yankees, but they were swept in the series.

The young phenom acknowledged his appreciation for the award and being able to play the season despite the COVID-19 pandemic.

Shane Bieber is under contract with the Indians for another year and isn’t expected to enter free agency until 2025.

Before the season, Bieber was a potential candidate for a long-term contract extension. Now, that extension is looking more and more likely.

With the departures of Bauer, Corey Kluber and Mike Clevinger, Bieber is now the primary ace for the Indians.

Heading into next season, he will almost surely have his eyes on a second consecutive Cy Young award.

He has quickly become the face of the Indians franchise and is proving himself in the big leagues. Expect Bieber to put up more big numbers in Cleveland for at least a few more years.