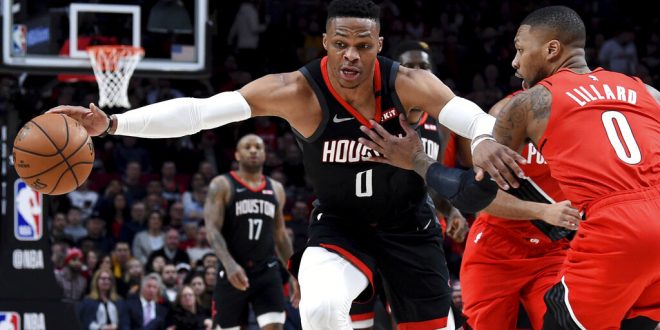 FILE - In this Jan. 29, 2020, file photo, Houston Rockets guard Russell Westbrook, left, dribbles next to Portland Trail Blazers guard Damian Lillard, right, during the first half of an NBA basketball game in Portland, Ore. Westbrook said Monday, July 13, 2020, that he has tested positive for coronavirus, and that he plans to eventually join his team at the restart of the NBA season. Westbrook made the revelation on social media. As recently as Sunday, the Rockets believed that Westbrook and James Harden — neither of whom traveled with the team to Walt Disney World near Orlando last week — would be with the team in the next few days. In Westbrook's case, that now seems most unlikely. (AP Photo/Steve Dykes, File)

Harden and Westbrook Looking to Leave the Houston Rockets

As the start to the 2021 NBA season approaches, the Houston Rockets may face some major losses of both James Harden and Russell Westbrook.

Following the Rocket’s loss to the Los Angeles Lakers in the Western Conference semifinals this past season, the franchise made many structural changes that made both All-Star players question their future with the Rockets.

The Rockets feel no pressure to trade Harden or Westbrook regardless of their strong desires for fresh starts with different teams.

Houston is "willing to get uncomfortable" as training camp opens and the season begins, sources told @espn_macmahon. https://t.co/gUEToCAXL0

Even though both Harden and Westbrook have expressed their concern about their future with the franchise, neither player has yet to request to be traded out of Houston.

The Rockets are in no rush to trade either Harden or Westbrook. Both players currently have three years and around $131.5 million remaining on their contracts with the Rockets.

Harden Look to Move to the Nets

Harden turned down a two-year, $103 million extension with the Rockets. This historic offer would have made Harden the first player in the NBA’s history to earn $50 million per year. Harden’s rejection of such a contract blatantly expresses his desire to leave the Rockets.

Harden has his eyes set on moving to the Brooklyn Nets. This move would reunite Harden with his past teammate Kevin Durant, both previously playing together for the Oklahoma City Thunder.

ESPN Sources with @RamonaShelburne and @ZachLowe_NBA: As Houston’s James Harden considers his future with franchise, one possible trade destination is rising to top of his list: Brooklyn. The idea of reuniting with Kevin Durant and joining Kyrie Irving is resonating with Harden.

Harden is determined to make this trade happen. However, the Rockets have not currently made any serious moves to trade him to the Nets.  The team has no desire to trade him for the remaining years of his contract.

Westbrook to the Wizards

The Rockets have been more active in seeking trade arrangements for Westbrook.

The Washington Wizards have been one of the first teams to actively express interest in Westbrook, with the intentions to most likely trade John Wall. This trade would rely on the health of John Wall since he ruptured his Achilles tendon in February 2019.

The Rockets and Wizards have discussed a deal centered on Russell Westbrook for John Wall, sources tell @TheAthleticNBA @Stadium. No traction yet, Rockets are seeking more assets.

Previous From Russia to Tennessee to Florida: Ruzhentsev is Ready
Next Indiana Prepares For Ohio State Showdown