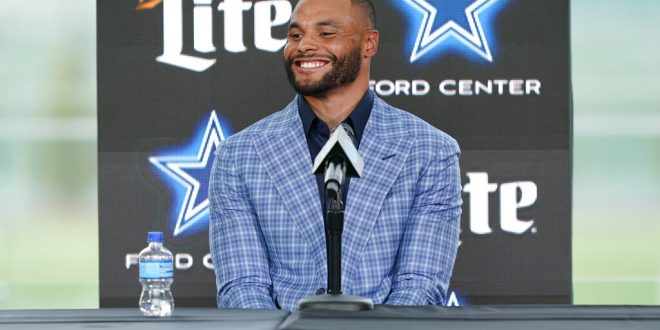 After two years of negotiations, Dak Prescott finally got his due.

Tuesday, the Dallas Cowboys announced they extended Prescott. The extension is for four years and $160 million, with $126 million guaranteed. Prescott’s deal includes a no-trade clause, keeping the Mississippi State product in the lone star state for the foreseeable future. Cowboys owner, president and general manager Jerry Jones had this to say on the lengthy negotiations with his franchise quarterback.

Prescott’s rise is nothing short of meteoric. In 2016, Dallas took a flier on a late round product from Mississippi State. At the time, the move seemed cautionary with then quarterback Tony Romo on the backend of his career. Yet, in the 2016 preseason, Prescott’s star shined. In week two of the 2016 preseason, Prescott posted a perfect QBR of 158.3 which led all quarterbacks that week. Additionally, he finished first in completion percentage, completing 78 percent of his passes. Prescott looked like a rising star, and with a preseason injury sidelining starting quarterback, Romo, it seemed Prescott’s time was now. No one could have predicted his quick rise, except for his college coach and current Gator’s head coach Dan Mullen.

From there, the rest is history. Prescott became a bonified superstar in Dallas. Through five seasons as a starter, Prescott has shined, leading the Cowboys to two NFC East championships. Also, Prescott became the third player to post 100+ touchdown passes and 20+ rushing touchdowns in NFL history (Cam Newton, Jeff Garcia). Furthermore, he is tied with Russell Wilson for most 100+ rating games through his four seasons. Even further, Prescott has the sixth highest touchdown-to-interception ratio in NFL history with 2.65. So, it’s clear Prescott’s frustrations after he could not come to terms on an extension in 2020, being placed on the franchise tag. To make matters worse, he suffered a season-ending ankle injury in 2020, muddying extension talk.

Monday, the Cowboys and Prescott finally agreed to an extension. Prescott’s $160 million extension includes a $66 million signing bonus. Additionally, his contract is worth an NFL record $75 million in the first year. Believe it or not, Prescott actually will be making more money than Patrick Mahomes in 2021.

While negotiations were lengthy, the Cowboys paid their guy.

Sam Petosa is a Journalism major pursuing a Specialization in Sports and Media at UF. The South Florida native produces daily shows for WRUF, including "Sport Scene with Steve Russell, and "The Tailgate." In addition, Sam provides weekly sports updates for WUFT News and radio Sportscenter's for WRUF radio. Sam has been a writer at ESPN Gainesville since January 2020.
@sampetosa5
Previous Becky Burleigh Gets Set For Final Home Game with Florida Gators
Next Gators Men’s Basketball Look For A Win In Their First Round Of The SEC Tournament