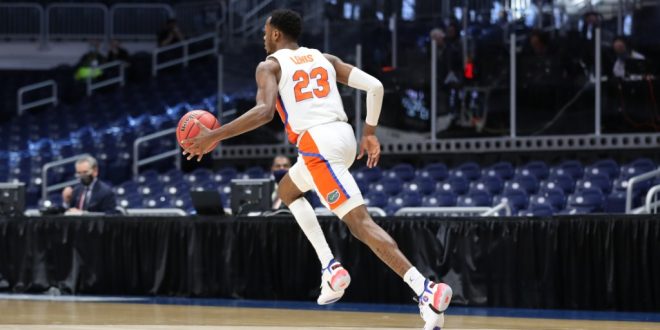 Scenes from the #Gators' 75-70 win over the Hokies in the first round of the NCAA Tournament. Photo by Alex de la Osa

Gators sophomore guard Scottie Lewis declared for the 2021 NBA Draft and intends to hire an agent. Lewis becomes the sixth Florida player to leave the program since the Gator’s loss to Oral Roberts in the NCAA Tournament. Within his two seasons, Lewis averaged 8.2 points and 3.4 rebounds. In addition, he accomplished 69 steals and 58 blocks.

“Playing in the NBA has always been my main priority in life,” said Lewis.

Scottie Lewis leaves the Gators for the NBA along with teammate Tre Mann. Then, Omar Payne, Ques Glover, Noah Locke, and Osayi Osifo depart the Florida program to enter the transfer portal to develop their skills elsewhere. In addition to the six players on their way out, one is exploring their options. Junior forward Colin Castleton also declared for the draft. Although since he did not sign with an agent, he is granted the option to stay if he is unsatisfied with his draft pick. Overall, Florida has only five active scholarships left.

In addition to the unknown, junior forward Keyontae Johnson has yet to reveal his status for next season. Johnson collapsed in December’s Florida State matchup and was benched for the remaining of the season in the best interest of his health.

Looking to next season, head coach Mike White is only expecting one incoming freshman. Kowacie Reeves is a 6’6″ five-star shooting guard who comes from Macon, Georgia. Aside from that, White will have to rely on the transfer portal to bring in players to rebuild his team.

The Gators reached a brutal end to their season after advancing as the number seven seed into the NCAA Tournament. Florida’s tournament play ended in an upset against Oral Roberts in the second round. Following the loss, White commented on recruiting for next season.

“And who knows these days, who is going to return and who is not?” explained White. “All of us coaches throughout college basketball will hit the ground running here when done playing in terms of recruiting.”

Parker Welch is a Senior at the University of Florida majoring in Sports Media at the College of Journalism & Communications.
@parkerrwelch
Previous Heat and Magic Both Win Thursday night
Next Lightning Defeat Blue Jackets 3-2