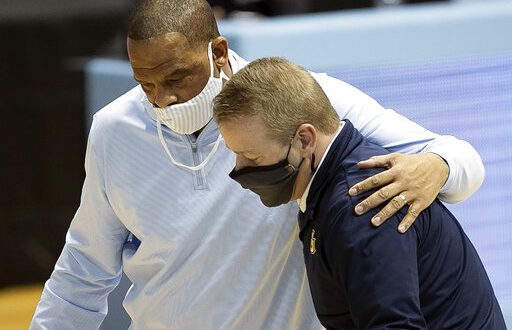 After former head coach Roy Williams’ 18 years at the helm for the University of North Carolina men’s basketball program, it took the program less than a week to find a qualified successor.

The university named Hubert Davis, a former player for Dean Smith and recently an assistant coach under Williams, as the program’s next head coach.

Davis will become just the fifth coach to lead the Tar Heels since the legendary Dean Smith took the position in 1961. The program spent six seasons from 1997-2003 under coaches Bill Guthridge and Matt Doherty before hiring Williams.

Davis said that the previous examples set by Smith and Williams have helped prepare him for the job.

Davis started his journey at North Carolina as a player under Dean Smith from 1988-92. As a player, he won 137 games winning the ACC twice and reaching the Final Four in 1991. Davis averaged 11.8 points per game as a player and still holds the school record for three-point shooting percentage (.435).

The newly-hired head coach was drafted twentieth overall by the New York Knicks in the 1992 NBA Draft. He played 12 seasons in the league and finished with the second-best career three-point shooting percentage in NBA history (.441).

Davis then spent seven years as a basketball analyst for ESPN after retiring from the NBA. He most recently spent nine years as a North Carolina assistant under Roy Williams from 2012-21.

In addition to his time as a coach and a player, Davis has become an integral member of the North Carolina and Chapel Hill community. Davis talks about the impact that the community has had on him and his family.

Previous Close, But No Cigar for Gonzaga
Next Kadarius Toney Making Leap to NFL