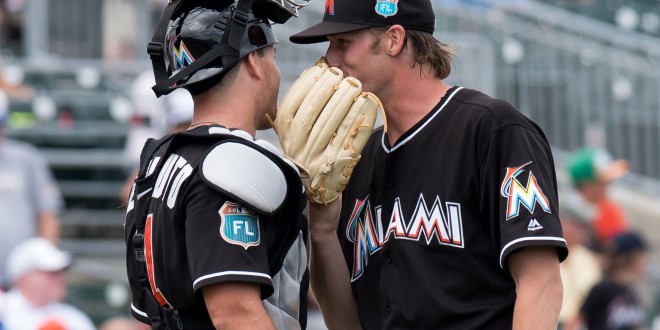 Marlins Hope to Avoid the Home Sweep Against the Cardinals

The Miami Marlins came up short as the team fell 4-2 in a rally Tuesday night. Miami dropped its fourth home loss to start the beginning of the MLB season.

With the score knotted up at 2 each, sixth inning madness ensued as Cardinals catcher Yadier Molina hit a tiebreaking sacrifice fly to take the lead over Miami. St. Louis went on to score three runs in the inning. Later in the ballgame, Dylan Carlson rocketed a solo home run in the ninth inning to solidify a Cardinals victory. The insurance run was Carlson’s second homer of the year.

After struggling to find his groove early on, Cardinals starting pitcher John Grant managed to work his way out of a no-out, bases-loaded situation in the bottom of the third. Grant struck out four batters; however, he accumulated three walks over four innings.

Luckily, the St. Louis defense stood its ground on the field and converted a pair of double plays to prevent the Marlins from crossing home plate.

Up On The Mound This Afternoon

Jack Flaherty will throw the first pitch for the Cardinals, while Pablo Lopez will start on the mound for the Marlins. The two will face off in Marlins Park where Lopez has succeeded the most in his career. The youngster has a  3.16 ERA at home compared to a 6.11 on the road. If Lopez’s stellar pitching keeps up, it’s possible that Miami will have a chance to avoid the three-game sweep.

The @Marlins hand the ball to Pablo Lopez for the series finale against the Cardinals on Wednesday afternoon!

Tune in to the live-action as the Marlins look to bounce back into the win column with a victory over the Cardinals beginning at 4:10 pm.

Angel is a student at the University of Florida. She is a Multimedia Journalist who is currently a Sports Reporter and Writer at ESPN Gainesville. Follow her on Twitter (@angelcwells) and Instagram (@angel_wells). Be sure to follow her NFL Twitter account to stay up to date with the latest NFL news. (@UpToDate1NFL)
@angelcwells
Previous Softball Set to Host Two Games Against USF in Midweek Matchup
Next Rays on a 3-game Losing Streak Heading into Matchup with Red Socks