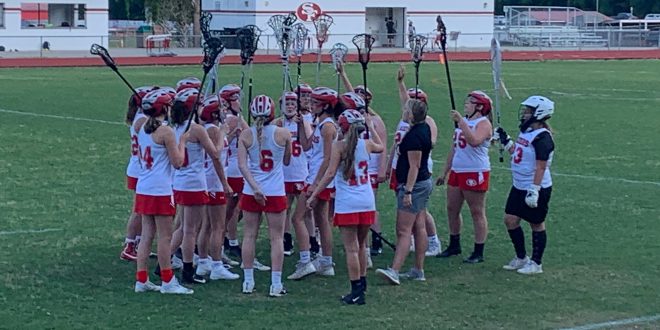 Santa Fe Girls Lacrosse huddles before their matchup with Eastside.

The Santa Fe Raiders girl’s lacrosse team (6-5) took on the Eastside Rams (1-9) on Tuesday. It was Senior Night for the Raiders who finished off the regular season with a huge 16-3 victory.

The Raiders were led by junior Hallie Morgan and seniors Haley Barber and Skylar Hickey who put in a combined 13 goals on the day.

All Raiders From the Start

The Santa Fe Raiders controlled the game from the opening draw.

After an early save from freshman Meagan Wisener, the Raiders pushed the ball down the field and into Eastside territory.

Santa Fe senior Shauna Morton drew a penalty and earned the Raiders a free shot at goal. Rams goalie Naomi Richards blocked the shot and forced the ball out of bounds. The ball was picked up by Raider senior Skylar Hickey who ran behind the goal and passed to a streaking Haley Barber who put the ball into the back of the net.

After another scoop and score from Barber, Hickey took the ball from the ensuing draw and ran down the left side of the field. Hickey then cut inside and shot the ball into the bottom corner, bringing the score to 3-0.

Hallie Morgan opened up her scoring for the Raiders with 16:23 left in the game. Morgan took advantage of a sleeping Rams defense, running behind the goal to score to put the Raiders on the board.

With another goal from Barber and Hickey, Santa Fe went into the first water break with a six-goal advantage over the Rams.

Then, Eastside came out of the break with a push of their own.

Rams freshman MaKenna Davis took advantage of a penalty and put her shot past Santa Fe’s Meagan Wisner and brought the score to 6-1.

The final five minutes of the first half finished with four more goals from Santa Fe. Eastside closed with another goal off a penalty as Rams junior Abby Ferrell scored bringing the halftime score to 10-2 in favor of the Raiders.

The momentum stayed with Santa Fe throughout the second half. The Rams were able to put one more goal on the scoreboard, but the Raider defense locked up and the offense took over.

The Raiders scored six goals in the second half, each coming from a different player. Barber, Hickey, and Morgan each added to their tally while Rachel Peters, Emma Maroon, and Fallon Flynn all got on the scoresheet.

The Raiders ended the day with a dominant 16-3 Senior Night win.

“It’s so exciting,” Crumwell said, “It has been so much fun watching them grow and this last home game means a lot to win it.”

While this was the last game at home for the seniors, the season is not over yet. The Raiders will begin their playoff run on Monday.

Cromwell says she plans to work on moving the ball and getting to the goal and said that she is extremely proud of how far her defense has come.

Chris Will is a second-year journalism student with a focus in sports and media. Originally from the Fort Lauderdale area, Will is now the beat reporter for Florida Gymnastics and covers all things sports in Gainesville.
@_Chris_Will_
Previous Gator Baseball Welcomes Florida A&M for Midweek Matchup
Next Santa Fe Baseball Beats Eastside and Extends Winning Streak