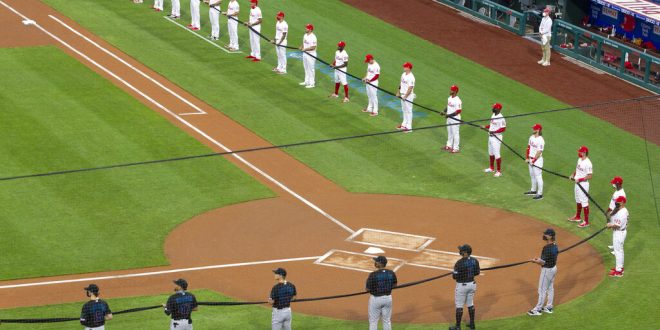 The Philadelphia Phillies, top, and the Miami Marlins hold a black ribbon in honor of the Black Lives Matter movement and in memory of George Floyd, before a baseball game Friday, July 24, 2020, in Philadelphia. Major League Baseball has already postponed a second scheduled game between Miami and Baltimore after more than a dozen Marlins players and staff tested positive for the coronavirus, prompting the club to lock down in Philadelphia. Commissioner Rob Manfred said the soonest the Marlins could resume their schedule is Wednesday, when they are set to play in Baltimore. (Charles Fox/The Philadelphia Inquirer via AP)

Hundreds of people gathered outside of the Hennepin County Courthouse in Minneapolis, MN, on Tuesday afternoon. Millions of others across the world watched. They waited to hear the verdict for former Minneapolis police officer Derek Chauvin.

Athletes take a stand for injustice

Floyd, 46, died on May 25, 2020, while in Minneapolis police custody. A nine-minute video of Chauvin holding his knee in Floyd’s neck surfaced around the internet, causing an uproar across the United States.

After Floyd’s death, many athletes boycotted games in multiple leagues to protest the deaths of Black men and women caused by law enforcement. Almost nearly a year later, to Floyd’s death, the sports world reacts to the verdict of the Chauvin trial.

NBA players took a knee together during the national anthem to protest police violence and systemic racism.

The games restarted after the coronavirus pandemic stopped play in March. pic.twitter.com/oVxf8eof6H

Many athletes and other prominent figures across the sports world shared their reactions on social media accounts, expressing their feelings on the guilty charges.

Here’s what the sports world had to say about Tuesday’s verdict:

Justice and Accountability! Things I never thought I would see. There’s much more work to do, but this is an amazing start working toward the reform this country NEEDS!

Sending love and strength to Minn today, to the family and community of #GeorgeFloyd and so many others. Whatever happens, #derickchauvin killed George, we know this. Let’s continue to fight for a world where this doesn’t happen. #DefundThePolice #BlackLivesMatter

I was going to make a celebratory tweet but then I was hit with sadness because we are celebrating something that is clear as day. The fact that so many injustices occurred to make us hold our breath toward this outcome is really telling.

His loved ones can hopefully sleep easier.

The time to collectively examine the treatment of Black people, in particular Black boys/men, by some law enforcement is long overdue.

The path to healing must begin. #BlackLivesMatter

Coaches and players in the NBA chimed Tuesday night with their thoughts via Chuck Sivertsen:

Wow! Glad to see accountability today with the verdict for George Floyd, but I can’t stop thinking of the many people who have been abused by systemic racism. Let’s celebrate this moment while acknowledging the path to true justice takes much more work. May God bless you all.

Thank you God. Wrong is Wrong!

While there was justice served, many believe this a step forward, but there is still a long way to go until equality and police reform is fixed within the United States.

WAY MORE WORK TO DO.

Today we saw some accountability for the murder of George Floyd. The fight for equality and police reform is far from over. I will continue to fight for real change, and as always, I encourage others from the hockey community to join.

Towns spoke about it being a step towards reform: