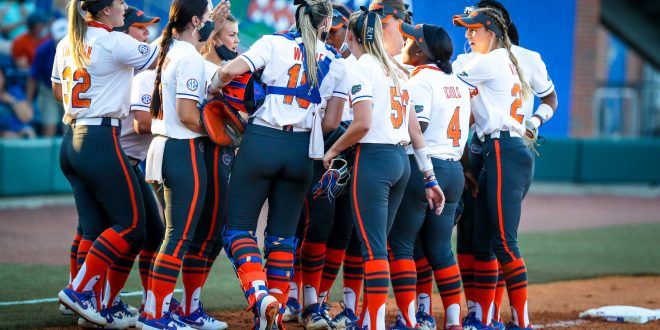 An early deficit did not shut down the Gators Softball team against Texas A&M. With the Aggies posting three runs in the first three innings, the Gators trailed by one for much of Friday evening. However, Charla Echols added to her team-leading home run total in the final frame.

A one-out, three-run home run to center field erased the deficit and pushed the Gators to a series-opening victory. Furthermore, the number four Gators improved to 38-8 on the season.

This Florida team seems to thrive when they score first. Earlier in the season, head coach Tim Walton said that is when his team is at its best. Contrarily, they may struggle when the opposition strikes first.

That was the case in the second and third innings. A costly two-out error by Sarah Longley allowed Kayla Garcia’s single to put the Aggies up 1-0 in the second.

Two more Aggie runs put the Gators in an early 3-0 hole but the Gators on offense would pick up their first hits of the game in the bottom of the third.

Back-to-back doubles from Cheyenne Lindsey and Hannah Adams cut the deficit to two. Then, immediately after Adams’s double, Kendyl Lindaman knocked in her 30th RBI of the season.

Now, the lead sat at 3-2 with the Gators finding their groove in the batter’s box. Perhaps to the frustration of Tim Walton, it would be a deficit that remained until the seventh inning.

Charla Echols always seems to deliver in the moment of need for the Florida Gators. For example, her seventh-inning homer against USF in the season-opening game led to victory. With the Gators trailing by that pesky one-run margin, she homered yet again.

However, Katie Chronister allowed Echols to have the heroic opportunity. Chronister, the fifth-year senior playing in her final regular season series, tossed four scoreless innings in relief of Elizabeth Hightower to keep the Aggies at three runs. This included holding the Aggies to no runs with the bases loaded with Jaimie Hoover making a sliding grab in left field in the fourth inning.

The Gators went three straight innings after their two-run third without a hit. Their only baserunner came on a hit-by-pitch from Emily Wilkie.

Then, in the seventh inning, Cheyenne Lindsey and Hannah Adams walked to put the tying-run in scoring position. After Kendyl Lindaman popped out, Charla Echols rocked the fifth pitch in her at-bat to straightaway center field. Echols’s teammates mobbed the junior at home plate to keep their SEC regular season championship hopes alive.

With Arkansas already concluding their regular season and clinching a share of the SEC regular season crown, Florida needed a sweep of the Aggies to clinch a share.

That’s exactly what happened; the Gators swept the Aggies and earned a share of the SEC regular season championship with Arkansas.  The two teams did not meet in the regular season and the Gators will be the number one seed for the SEC Tournament based on a tiebreaker, in this case the season series with the next best team in the standings, Alabama.  Florida had the better record in that series so it clinches the top seed.

Originally from Seminole in the Tampa Bay area, Kyle is a contributor for ESPN Gainesville as well as local NPR and PBS affiliate WUFT. Kyle wants to get into sports with a lofty dream of being a sports broadcaster. He was raised playing soccer and baseball while watching hockey and football, so the knowledge about various sports is fairly extensive.
@KyleFanslerUF
Previous Gators Take Baseball Series at Kentucky
Next Florida Lacrosse Host the First and Second Round of NCAA Tournament