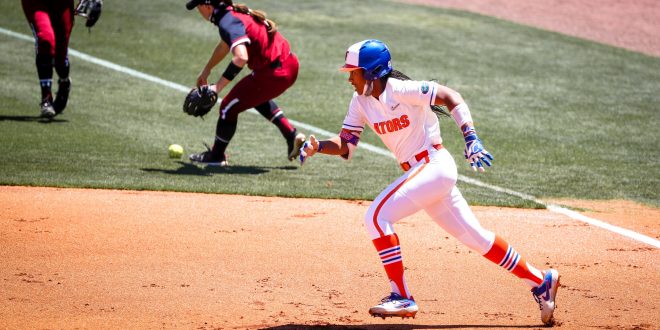 In the first inning, two miscues by South Carolina allowed the third ranked Florida softball team to score an unearned run with no outs. Just like their win on Saturday, Florida took a 1-0 lead in the first inning, led by Hannah Adams.

Gator coach Tim Walton said after Saturday’s win that this team plays with confidence when they lead. That sentiment came forward again on Sunday. The Gators built on their early lead and took advantage of South Carolina miscues to win 4-2.

With the win, the Gators improve to 6-0 in SEC series on the season.

The opening inning set an example for how Sunday afternoon’s game unfolded.

Initially, South Carolina sent out freshman Leah Powell to the circle for the third game this series. In the first inning, two errors compounded to allow Hannah Adams to score from first. Later that inning, Kendyl Lindaman made it 2-0 with a bloop single out to left field to score Lindsey.

In the second frame, Powell loaded the bases with two walks and an Adams bunt. Kelsey Oh replaced Powell, but tossed a five-pitch walk to Charla Echols to score another run and make it 3-0.

While not formally recognized as errors, walks are avoidable miscues. In the fourth inning, three more walks from Oh and an error loaded the bases for Charla Echols. Echols picked up her second RBI of the game with a sacrifice fly to score Sarah Longley from third.

However, this was a farm from perfect offensive performance. The Gators left eight runners on base. Notably, Kendyl Lindaman had an uncharacteristic off-day leaving five on board.

Walton commented on his team’s output in the batter’s box.

“Not at all,” Walton said about how satisfied he was with the offensive production.

Fortunately for him, his pitching staff and defense did well enough to protect their lead.

Throughout the contest, Natalie Lugo diced up South Carolina batters. The one exception came in the top of the fourth inning when Jordan Fabian rocketed a ball over the fence in left-center field.

Still, Lugo prevented any batters from reaching beyond second, yielding only five hits and one walk.  She struck out four Gamecocks, but when they did put the ball in play, a strong defense made the plays.

The senior praised her defense for allowing her to pitch comfortably with that security behind her.

“If [the batter] gets a piece of it,” Lugo said, “I know that all seven people behind me are going to have my back and make great plays.”

Katie Chronister replaced Lugo after 5.2 innings pitched. Then, the game got interesting.

In the seventh inning, two doubles scored a run for South Carolina to make it 4-2 before a Gator error put two runners on with just one out. With the crowd at Katie Seashole Pressly growing anxious, Chronister locked in for the final two outs of the game.

A strikeout of Mackenzie Boesel and a groundout from Kassidy Krupit stymied the Gamecocks’ late attempt at a rally.

In short, Chronister and Lugo combined to give up seven hits and strike out six South Carolina batters.

Florida is the only team to hold a perfect series record in SEC play this season. Coming off a huge series win in Tuscaloosa against number three Alabama, the Gators were shocked in the first game of the series with South Carolina.

Walton said the loss was not a wake-up call, as his team’s play has been consistent outside of a couple big hits.

With Sunday’s win, the Gators improve their record to 35-7 (14-4 SEC). Despite the perfect series record, Florida still sits in second in the SEC standings behind Arkansas.

Next up, the Gators have a midweek clash with Florida A&M before traveling to Columbia to take on No. 18 Missouri.

Originally from Seminole in the Tampa Bay area, Kyle is a contributor for ESPN Gainesville as well as local NPR and PBS affiliate WUFT. Kyle wants to get into sports with a lofty dream of being a sports broadcaster. He was raised playing soccer and baseball while watching hockey and football, so the knowledge about various sports is fairly extensive.
@KyleFanslerUF
Previous Florida Gators Baseball Take Series Over Auburn Tigers
Next FEATURE: Timmy DePaul – Leader on and off the Field for PK Yonge Baseball