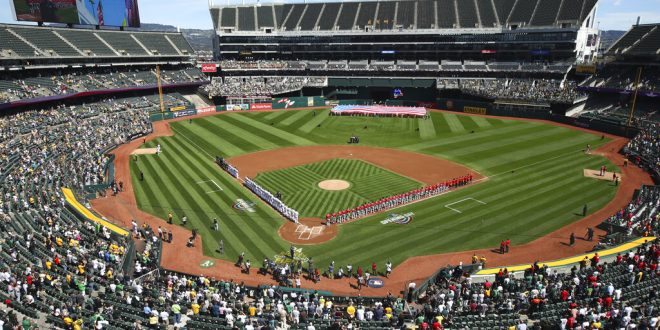 FILE - The Los Angeles Angels and Oakland Athletics stand for the national anthem at the Oakland Coliseum prior to an opening day baseball game in Oakland, Calif., in this Thursday, March 29, 2018, file photo.Major League Baseball instructed the Athletics to explore relocation options as the team tries to secure a new ballpark it hopes will keep the club in Oakland in the long term. MLB released a statement Tuesday, May 11, 2021, expressing its longtime concern that the current Coliseum site is “not a viable option for the future vision of baseball.” (AP Photo/Ben Margot, File)

Yeah, yeah. Another one of those hypothetical stories. But this just got a little more real today. The Oakland Athletics announced on May 11 they will be exploring relocation to a new market after a request from MLB, per ESPN MLB insider Jeff Passan.

BREAKING: The Oakland A's will start exploring relocation possibilities after Major League Baseball suggested the organization consider moving to other cities if the Howard Terminal stadium proposal is not approved by local politicians.

As the stadium woes drag on, and the lease at the Colesium ending in just three years, the A’s search for a new home outside of Oakland.  This move could simply stiff-arm an eleventh-hour decision by the city to keep its last professional sports team. We saw that with the Chicago White Sox in 1989 when they almost moved to St. Petersburg, Fla. (and yes, a team actually wanted to move to what is now called Tropicana Field).

But for every team that is saved, there are plenty that ended up elsewhere. That leads to the next question: Where do they go? The Tampa Bay Rays remain in the stadium purgatory they have been in since 2009. Make that two teams potentially moving elsewhere.

And, AND, even if the Rays and A’s stay put

That makes it a race to see which city nabs a team first. Let’s see which market has a shot at-bat. Picks are based on cities named by MLB Commissioner Rob Manfred in the past.

Might as well start with a city that already scooped up Oakland’s NFL team, the Raiders. Ever since Vegas secured the Golden Knights in 2017, sin city has become the front-runner for gaining a team in nearly every league. The WNBA got in on the action a year later, and the Raiders moving to Allegiant Stadium turned even more heads to Clark County.

Over the last 30 years, Las Vegas has seen its population triple, making it no longer just a city that relies on temporary guests to fill any seats. With sports betting on the rise and gaining further acceptance, Vegas is no longer a stigmatized pick either (sorry Pete Rose, you’re still banned).

Perhaps the Raiders already phoned the A’s to tell them how nice the dry heat is too.

Get out your passports and Google translate. We’re heading north of the border.

Rays fans understandably just rolled their eyes. They’ve been hearing about the split-city project for nearly two years, and even a pandemic that closed the US-Canadian border couldn’t oust it.

Montreal lost the Expos back in 2004 when they became the Washington Nationals. Since then, the movement to get a team back has grown. There’s even a Montreal Expos Twitter page.

There is even a group backing its return. Stephen Bronfman, son of former Expos owner, Charles Bronfman, leads the groups.

Perhaps Bronfman bails on Stu Sternberg if it means the A’s will move full time to Montreal three years before the Rays can do it for even part time. There has been an interest to bring baseball back to Montreal, including the expansion route, but relocation remains the leading option.

Montreal is still one of the largest markets without an MLB team and has a rich baseball history dating back to Jackie Robinson and Montreal Royals. Consideration will remain throughout.

Another growing metro area. Nashville already has the Predators of the NHL and the Titans of the NFL. While Memphis snagged the NBA team, this is the Tennessee city fit for baseball.

There’s even an ownership group beginning a push. Music City Baseball is a group focused on bringing MLB to Nashville and rebirthing the Nashville Stars, a former Negro League team that lasted for nearly two decades.

Music City Baseball even has some big names backing it, including Justin Timberlake, Darius Rucker and Luke Comb. Like the Expos, the Nashville Stars even have a Twitter page.

This was Broadway in downtown Nashville for the NFL Draft… Imagine how crazy it will be for some World Series games! pic.twitter.com/sOGBvFzCJc

Nashville seems like its best chance, and most desired route, to get a team is through expansion. Unless Sternberg or Fisher decide to put their teams up for sale, which has not been announced anywhere.

Other cities that have been bouncing around include Charlotte, Portland and Vancouver.

However, of these cities, only Portland has an organized group trying to attract baseball. While the Mariners are a state north, it wouldn’t be that much of a damper on things. The only other team is the Trailblazers too. MLB also would likely prefer keeping the A’s out west and/or at least add another team out there because of travel.

Charlotte has proven it can support teams with the Carolina Panthers and the Hornets (the second incarnation at least).

Vancouver has some plusses and some big minuses. Hockey has been there since 1970, has had minor league baseball since 1978 and has had an MLS team for over a decade. However, the NBA failed to make it there, and the Grizzlies moved to Memphis.

Harrison is a sports coordinator at ESPN 98.1 FM/850 AM WRUF. He served as a beat writer for Florida Gators football for the 2019 and 2020 seasons. He also contributes to WRUF's Gainesville Sports Center segments and makes appearances on the Clash on Harp on Sports. Harrison has been a content writer for WRUF since January 2019 as well.
@HarrisonSmaj
Previous Reaction to Tim Tebow possibly signing with the Jags
Next Gators Baseball Loses to Stetson for First Time in 14 years