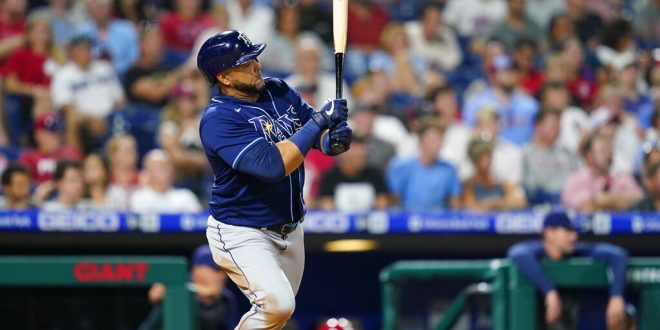 The Tampa Bay Rays look to end a three-game away series with a sweep after beating the Boston Red Sox 12-7 on Tuesday. But, first, let’s look at how the Rays have been so dominant against the Red Sox.

The Rays kept control of the game, putting up runs in nearly every frame while holding the Red Sox to a single second inning score. Eduardo Rodriguez hindered the Rays the last time these teams met. However, the Rays got to him in the second, bringing together a series of singles and doubles.

In the third inning, Nelson Cruz hit a two-run homer, launching the ball out 410 feet for 107 mph. Former Gator Mike Zunino followed up in the fourth inning, extending the lead 6-1 with the long ball. However, Cruz was not finished as he hit another home run in the fifth inning, making the score 7-1 Rays.

Also, Jordan Luplow continued the offensive explosion with a three-run homer in the seventh inning, making it 12-1 going into the eighth inning.

After an endless string of hard-hit balls, the Tampa Bay Rays end the game in a win, 12-7.

Designated hitter Nelson Cruz has provided some needed power to the team after the Rays acquired the veteran in July. At the age of 41, Cruz has become the oldest in major league history, with 30 home runs in a season.

Brandon Lowe has been the best hitter for Ray’s lineup in 2021. He leads his team with 33 home runs. Additionally, the 5’10 second baseman is tied for the team lead in walks with 62. Shortstop Wander Franco currently has a 37-game on-base streak, passing Mickey Mantle for the second longest active on-base streak for a player age 20 or younger.

Lastly, Joey Wendle has been on a hot streak, making good contact and spraying the ball around the field for singles and doubles.

The Tampa Bay Rays (88-51) are ranked first in the American League East standings. Additionally, the Boston Red Sox (79-62) are ranked third in the division.