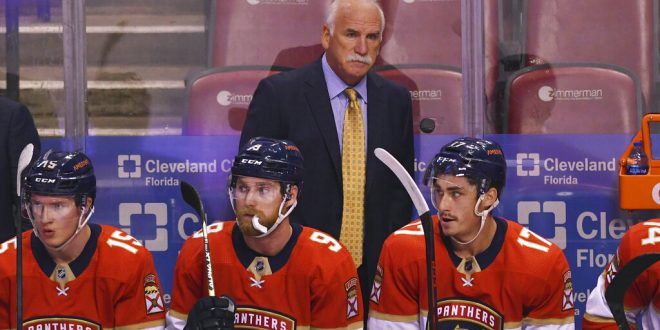 Florida Panthers head coach Joel Quenneville looks on from the bench during the first period of an NHL hockey game against the Colorado Avalanche, Tuesday, Oct. 21, 2021, in Sunrise, Fla. (AP Photo/Jim Rassol)

No one’s job security is safe.

Even with a 7-o record to begin the 2021-22 NHL season, Florida Panthers head coach Joel Quenneville has abruptly resigned following a meeting with commissioner Gary Bettman.

On Wednesday, former Chicago Blackhawks 1st round draft pick Kyle Beach revealed himself as “John Doe” in a lawsuit he previously filed against the team. Beach claimed the Blackhawks mishandled his sexual abuse claims back in 2010 against the team’s video coach. Quenneville, Chicago’s head coach at the time, allegedly knew about the incident but made minimal effort to address it.

Quenneville previously denied having any knowledge of the situation. However, following Beach’s interview with TSN and a damning report released by Chicago-based law firm Jenner & Block, Coach Q’s past statements appear to be misleading at best.

In his near half-hour long TSN interview, Beach said, “There [was] no way Joel Quenneville can deny knowing it,” and the Blackhawks’ chain of command failed him.

Jenner & Block’s investigative report, commissioned by the Blackhawks as part of the lawsuit proceedings, affirms that notion. The report details a meeting having taken place amongst Blackhawks executives on May 23, 2010. With Quenneville in attendance, Chicago’s front office was more focused on the team’s Stanley Cup run than the sexual abuse allegations at hand.

Brad Aldrich was the video coach accused of sexual assault by Kyle Beach. He was permitted to stay with the Blackhawks until the season ended. Soon after the team’s 2010 Stanley Cup victory, Aldrich would resign. He would still spend a summer day with the Cup and have his name engraved on the trophy.

Massive Impact and the Departure of Joel Quenneville

Immediately after the report went public, Blackhawks general manager Stan Bowman and Senior Vice President of Hockey Operations Al MacIsaac left their posts. And now Coach Q has lost his job in South Florida. Leaving behind 3 years and $15 million on his contract, Quenneville released a statement following his resignation:

This move will no doubt shake up the locker room of the scorching hot Panthers. How the team will respond to this sudden shakeup will be interesting to see. Assistant coach Andrew Brunette will take over as interim head coach for the time being.