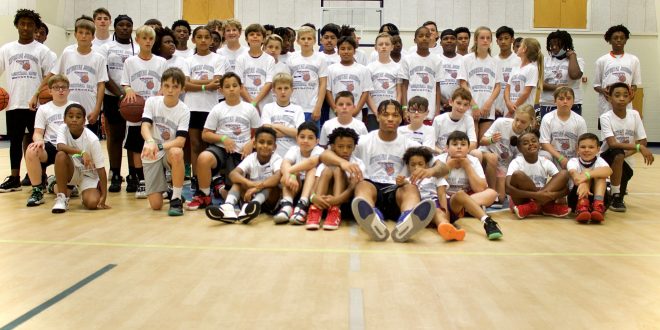 Keyontae Johnson hosts a Basketball camp with the kids in Gainesville, Fl at West Side Baptist Church. Captured By: Jason Bennett @Jbennett_Media

Is playing his senior year worth $5 million to Keyontae Johnson?

Keyontae Johnson, senior forward for the University of Florida, has the option between a $5 million insurance payout and his senior year of collegiate basketball.

Prior to last season Johnson took out a $5 million insurance policy that went into effect July 2020. The University of Florida paid the premiums on the policy. If an injury causes a potential alteration in the athlete’s draft position, the insurance payout offers financial assistance.

Cashing in on the policy eliminates Johnson from eligibility from UF’s season. Should Johnson try to become medically cleared to rejoin the team he forfeits the opportunity to capitalize on the payout.

During the 2020 season, Johnson collapsed on the court during the Florida vs. Florida State game on December 12. The forward immediately went to Tallahassee Memorial Hospital. He was airlifted to UF Health a few days later, where he spent 10 nights.

Doctors say Johnson’s collapse was a result of a heart condition. They also say that there is no connection between the collapse and the positive COVID-19 test result that Johnson had received prior.

Johnson is also possibly eligible for the NCAA’s Exceptional Disability Insurance Program. If athletes still have eligibility left, and a possibility of going first round in an upcoming draft, they qualify for the program.

Up to $10 million can be insured to athletes in men’s basketball and football through the program.

Since his collapse on the court, Johnson has taken over as a “honorary coach” for the team. He was on the bench for the Florida’s exhibition game on Monday against Embry Riddle.

Johnson has been active on social media, promoting his basketball camp and sharing videos and pictures of him practicing and working.

Rylee is a third year Journalism major with a specialization in sports and media at the University of Florida College of Journalism and Communications.
Previous Indianapolis hosts the New York Jets
Next Crimson Tide Heavy Favorite Against LSU